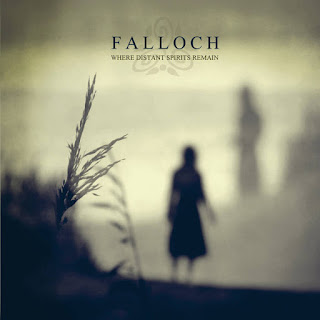 Falloch are a band from Scotland that mixes post black metal with dark metal and shoegaze and this is a review of their 2011 album "Where Distant Spirits Remain" which was released by Candlelight Records.

Drums range from slow, mid paced to fast drumming with some occasional blast beats, while the synths when they are utilized bring a very dark ambient/atmospheric and folk/new age music feel to the music, as for the bass playing it sounds very strong and powerful with riffs that combine black metal with shoegaze and indie rock.

Rhythm guitars range from slow, mid paced to fast riffs that combine influences from indie rock, shoegaze, black and dark metal, while the lead guitars are very distorted and melodic black metal/shoegaze leads, as for the acoustic guitars they bring a very dark and progressive/folk music feel to the music with a lot of full chords and finger picking.

Vocals are mostly clean singing male vocals mixed in with some occasional female vocals and only a small amount of aggressive growls, while the lyrics touch on dark and depressive themes, as for the production it sounds very strong, powerful and professional with all of the musical instruments having a great sound and being very easy to hear.

In my opinion Falloch are a very good post black/dark metal band and while some black metal fans might not like this band since it is very progressive and lacks a lot of aggressive vocals, I still feel this is a good band and if you are looking for  something original, you should check out this band. RECOMMENDED TRACKS INCLUDE "Beyond Embers And The Earth" "We Are Gathering Dust" and "Where We Believe". RECOMMENDED BUY.

http://www.myspace.com/falloch
Posted by OccultBlackMetal at 5:35 PM