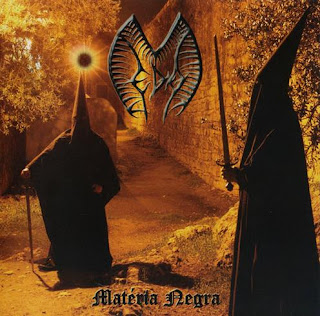 Medo are a band from Portugal that plays a very dark experimental, occult and ritualistic form of black metal and this is a review of their 2011 album "Materia Negra" which was released by War Productions.

Drums range from slow, mid paced to fast drumming with some blast beats being used at times, while the keyboards bring a very dark ritualistic avant garde feel to the music as for the bass guitar when when it is utilized briefly has a very dark and strong tone.

Vocals range from high pitched black metal screams, demonic growls, spoken word ritualistic passages and the occasional clean singing which is very dark and evil sounding, while the lyrics which are written mostly in Portuguese with one song being written in English cover Fear, Death, Occultism, Rituals and Necro style themes, as for the production it has a very dark, primal and raw sound to it.

In my opinion Medo are a very good and original sounding dark experimental/black metal band and while this probably would not appeal to all black metal fans I can see the more occult people of this genre liking this album. RECOMMENDED TRACKS INCLUDE "You Will Never Burn All Witches' "Medium" "Licontropo A Maldicao' and "Rituale Romanum". RECOMMENDED BUY.

Posted by OccultBlackMetal at 12:51 AM