"Winterburn"  which  is  also  the  last  song  on  the  album  begins  with  distorted  ambient  noises  and  programmed  drum b eats  before  adding  in  vocals  and  you  can  also  hear  synths  being  utilized  in  the  background.

Song  lyrics  cover  depressive,  suicidal  and  anti  religion  themes,  while  the  production  has  a  very  dark,  raw  and  primitive  sound  to  it.

https://unhappy1.bandcamp.com/
Posted by OccultBlackMetal at 10:43 PM No comments: 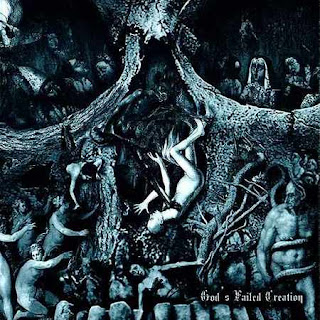 "Tenus  Abyssus  Quam  Servo  Caelum"  comes  in  with  clean  guitar  playing  before  adding  in  heavy  guitar  riffs  and  drums  which  leads  up  to  grim  black  metal  screams  and  melodic  clean singing  vocals  in  the  background  and  a  few  seconds  later  the  guitar  riffing  starts  utilizing  more  melody  as  well  as  the  vocals  utilizing  deeper  elements  before  adding  in  a  small  amount  of  guitar  solos  and  leads.

"A  Life  Without  End"  which  is  an  instrumental  begins  with  wind  sounds  along  with  clean  guitars  in  the  background  before  adding  in  heavy  guitar  riffs  and  drums  and  the  song  switches  back  and  forth  between  clean  and  heavy  parts.

Song  lyrics  cover  Anti  Christian  themes,  while  the  production  has  a  very  strong,  powerful  and  heavy  sound  for  being  a  self  released  recording  where  you  can  hear  all  of  the  musical  instruments  that  are  present  on  the  album.

http://www.youtube.com/watch?v=C96kyLozLEE
Posted by OccultBlackMetal at 7:52 PM No comments: 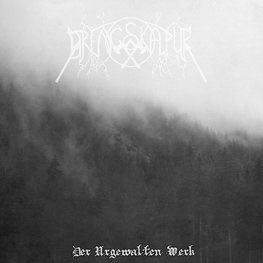 "Vereint"  which  is  an  instrumental  begins  with  soft  acoustic  guitar  playing  that  utilizes  finger  picking  and  the  song  is  very  short  and  under  2  minutes.

http://www.youtube.com/watch?v=RQteIk8E46M
Posted by OccultBlackMetal at 4:38 PM No comments:

1. Can you tell us a little bit about the musical project for those that have never heard of you before?
There isn’t much to tell.  It is a bedroom project.  I rarely play but when I do I record the results.  Mostly each track is written and recorded in the space of a couple of evenings.  If it sounds bad and fucked up I don’t care –it is just a cathartic exercise for me.  I found playing the guitar a good substitute for self-injury and substance abuse.  It has helped me get over those things.
2. I have seen the musical project being labeled as communist/occult black metal, can you tell as a little bit more about it and also how would you describe your views on Occultism and Communism?
I read some stuff on occult influences during the Russian Revolution.  There is also a book called ‘Marx and Satan’ written by a Romanian priest which gave me some good ideas.  He believed Marx was above all else a Satanist and sets out his evidence for it.  Of course I see this as a good thing.
3. What are some of the lyrical topics and subjects you have explored with both demo's?
I took the lyrics from poetry.  My sources were Mayakovsky, Valari Bruissov, Louis Aragon and Marx's early (Satanist) poetry.
4. What is the meaning and inspiration behind the name Entfremdung?
Entfremdung means 'alienation' or 'estrangement' in German.  Marx used the term in a political sense but it has a wider meaning too.
5. Currently there is only 1 member in the project, is it hard for you to find people that have the same visions as you music wise?
I guess so.  I haven't tried.  It's quite a private process.  I don't feel like having other people involved.
6. Currently the musical project is unsigned, are you looking for a label or have received any interest?
I've talked with one label but, to be honest, I can't see the point in releasing anything I've recorded so far through a label.
7. Are there any other musical projects besides this band?
No.
8. On a worldwide level how has the feedback been to your music by fans of black metal?
It's hardly been noticed at all.  A few people have contacted me and given good feedback.  I am glad those people can access and relate to what I have created.  That is enough for me.  I expect everyone else would hate what I do.
9. What direction do you see your music heading into on future releases?
I don't know.  Hopefully just... better.
10. What are some bands or musical styles that have influenced your music and also what are you listening to nowadays?
Some of my favourite black metal bands at the moment are Sentimen Beltza and Mourning Forest.  I really like the Quebecois scene too.  Akitsa and Forteresse especially.  Also the Black Twilight Circle and raw underground French bands like Breizh Occult.  Outside of black metal, I listen to lots of other genres. Especially Finnish and Japanese punk.
11. Outside of music what are some of your interests?
I like to read.  I'm interested in history, philosophy, politics and literature.  Other than that... sex, nature, travel, food.  Everything else bores the shit out of me.
12. Any final words or thoughts before we wrap up this interview?
Thanks for the interest.  Cheers.

https://www.metal-archives.com/bands/Entfremdung/3540366943
Posted by OccultBlackMetal at 11:09 PM No comments:

Posted by OccultBlackMetal at 10:04 PM No comments: 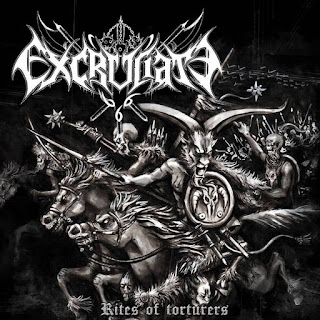 Posted by OccultBlackMetal at 9:30 PM No comments: 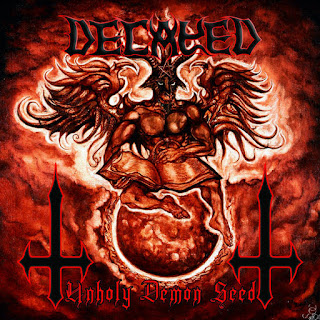 "Death  Chimes  Of  Armageddon"  kicks  in  with  ritualistic  demonic  chanting  before  adding  in  heavy  guitar  and  bass  riffs  along  with  some  drums  and  black  metal  screams  and  you  can  also h ear  synths  in  the  background  and  after  a  few  minutes  the  music  goes  into  a  faster  direction  along  with  some  blast  beats  and  after  awhile  it  starts  alternating  between  mid  paced  and  fast  parts.

"Departure"  finds  its  way  in  with  soft  acoustic  guitars  before  adding  in  heavy  guitar  riffs  and  drums  and  then  the  music  goes  into  a  faster  direction  along  with  some  blast  beats  and  high  pitched  black  metal  screams.

Song  lyrics  cover  Satanism  and  Occultism  themes,  while  the  production  has  it  very  raw,  powerful  and  heavy  sound  where  you  can  hear  all  of  the  musical  instruments  that  are  present  on  this  recording.

Posted by OccultBlackMetal at 8:18 PM No comments: 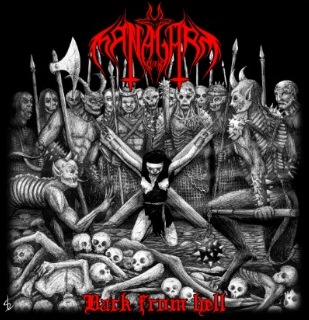 "Necromancia"  starts  up  with  fast  and  heavy  guitar  riffs  along  with  brutal  blast  beats  and  high  pitched  screams  and  a  few  seconds  alter  the  music  starts  adding  in  mid  paced  sections  along  with  a  small  amount  of  death  metal  growls  before  alternating  between  mid  paced  and  fast  parts.

'Blasphemic  Humiliation" comes  in  with  heavy  guitar  riffs  along  with  drums  before  going  into  a  faster  direction  with  brutal  blast  beats  and  high  pitched  screams  and  the  song  sticks  to  a  fast  black  metal  direction.

Song  lyrics  cover  Anti  Human,  Misanthropic,  Blasphemous  and  occultism  themes,  while  the  production has  a  very  strong,  powerful  and  heavy  sound  that  is  not  either  too  raw  or  overproduced  sounding.

Posted by OccultBlackMetal at 6:09 PM No comments:

"Dolunca  Mezarina  Ya  Mur"  begins  with  dark  and  melodic  sounding  guitar  riffs  and  drum  beats  along  with  some  depressive  black  metal  screams  a  few  seconds  later  and  the  riffing  remains  the  same  throughout  the  song.

"Karani  in  ycinde  Bekliyorum"  opens  up  with  dark  and  distorted  sounding  guitar  riffs  along  with  some  drum b eats  shortly  after  that  and  you  can  also  hear  some  melody  in  the  guitar  riffing  which  also  leads  up  to  some  grim  sounding  depressive  vocals.

"Tedergin  Hep  Ruhum"  comes  in  with  distorted  sounding  guitar  riffing  and  drum  beats  and  a  few  seconds  later  grim,  depressive  screams  make  their  way  into  the  song  and  the  riff  remains  the  same  throughout  the  song.

"Yalnizlik"  hits  it  off  with  sound  effects  along  with  some  synths  a  few  seconds  later  and  the  song  is  an  atmospheric,  instrumental  ambient  song.

"Yntihar"  which  is  also  the  last  song  on  the  album  begins  with  avant  garde  and  experimental  sound  effects  along  with  some  drum b eats  a  few  seconds  later  and  the  song  is  another  instrumental  ambient  song.

Posted by OccultBlackMetal at 9:54 PM No comments:

Song  lyrics  are  written  in  Greek  and  cover  Greek  Mythology,  while  the  production  has  a  very  strong,  powerful  and  heavy  sound  for  being  a  self  released  recording  where you  can  hear  all  of  the  musical  instruments  that  are  present  on  the  demo. 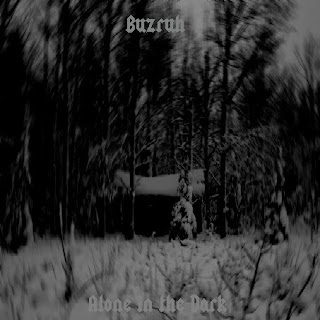 "Hatethislife"  opens  up  with  dark  and  heavy  sounding  guitar  riffs  along  with  some  drums  and  a  minute  later  depressive  black  metal  screams  start  coming  into  the  song  and  the  song  stays in  a  slower  direction.

"Waiting  In  Purgatory"  comes  in  with  dark  and  melodic  sounding  guitar  riffs  and  drums  before  going  into  a  faster  direction  along  with  some  blast  beats  as  well  as  alternating  between  slow  and  fast  parts  and  after  a  couple  of  minutes  black  metal  screams  finally  make  their  way  into  the  song.

Song  lyrics  cover  depressive,  suicidal  and  hateful  themes,  while  the  production  has  a  very  dark,  raw  and  primitive  sound  to  it.