1.For those that have never heard of you before, can you tell us a little bit about the band?
Lembrando os Mortos begins form the idea of playing ​​black metal, I'm the only member of the band. I've been playing for over 15 years so far, and I always wanted to bring something to the actual black metal scene.
So I started writing material for what is the first demo of the band " ritual de despedida"

2.How would you describe the musical sound that is present on the demo?
Music is strictly black metal, in all its glory, there are no subgenres, Lembrando os Mortos is  black metal is in all its complexity, fast parts, mid tempos, raw melancholic  melody, hatred and emotions as it should be.

3.What are some of the lyrical topics and subjects the band explores with the music?
The lyrics are about the man, as feel the life and his relationship with the death, about our ancestors who left and as the land is responsible for bury us all. The individuality, issues such as nature and how humanity destroys everything around.

4.What is the meaning and inspiration behind the name Lembrando os Mortos?
The name means remembering the dead, is a song of the Portuguese black metal band Inverno Eterno, of which I am a big fan.
5.According to everything I have read so far, the band members come from both Brazil and Urugay, how do you set up the reocrding process?

As I said LOM is just me, the truth is that I live on the border between these 2 countries, and for this I name both. The recording, mixing and all the instruments and vocals was done by me alone. 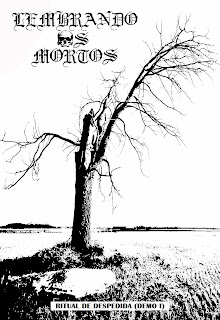 7.Currently the band is unsigned, are you looking for a label or have received any interest?
Yes, we had good interest to release the demo, and we are ready to release it next year

8.On a worldwide level how has the feedback been to your music by fans of black metal?
Much better than I was expecting to be the first material of the band, people giving plenty of support, and this is just the beginning.

9.Are there any other musical projects besides this band?
No

10.What direction do you see your music heading into on future releases?
There is only one direction to go: Black fucking Metal.
There is so much hatred, negativity and emotions to explore in the world of underground black metal.

11.What are some bands or musical styles that have influenced your music and also what are you listening to nowadays?
The only style that inspires me is the black metal, I breathe it, there are so many ways to be creative in this style.
My inspiration comes from the old school Norwegian, Finnish scene and the great Portuguese black metal scene.
I'm always listening to groups like Dolentia, Inthyflesh, Lux Ferre, Satanic Warmaster, Horna, Sargeist and new albums of Cosmic Church, Pavle Arnault, Azaghal, Cultes Des Ghouls, Eternum, Kvele. To name a few.

12.How would you describe your views on Satanism and Occultism?
These are very personal issues, and the only way I found to release it is behind Lembrando os Mortos songs.

13.Outside of music what are some of your interests?
Eat, drink and shit.

14.Any final words or thoughts before we wrap up this interview?
Thanks Occult black metal zine for the support.
Continue to support the true black metal.
Lembrando os Mortos is marching his paths to war !!! 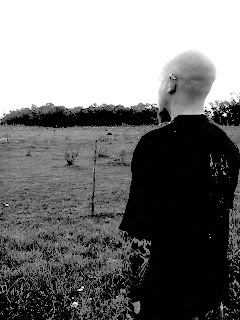 Posted by OccultBlackMetal at 4:08 PM