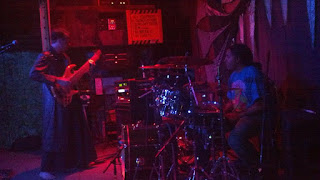 1. For those that have never heard of you before can you tell us a little bit about the band?
We're from Massachusetts and we're 2 bassists and a drummer playing some sort of black metal.

2.How would you describe your musical sound for those that have yet to hear the music?
That's a tough one. People sometimes hear that we have 2 bassists and a drummer that play some kind of black metal and they think we'd sound like Necromantia. I don't find any similarities in our band's sound. We have relaxed parts and intense parts, I would just advise to check out the EP from beginning to end and decide for yourself.
3. I have noticed when I listened to the album, the bass  guitars are the lead instruments and there are no regular guitars, do you feel this adds a lot more power to the music and also do you plan on using some regular guitars in the future?
Above all else, it forces us to think creatively when composing. I follow the work of Jean Baudin and other extended range bassists and think about how I can weave these musical elements into a style of music that has a distinctive aura, musically and lyrically.


; 4. Can you tell us a little bit more about the song lyrics?
Some songs are an amalgamation of excerpts of disgust and hatred, others are more thematic. "Glass Farm" is inspired by dystopian fiction, looking into the future at the last days of humanity.

> 5.What is the meaning and inspiration behind the name Barren Oak?
The imagery of an oak that has been dead and leafless for years but still stands is representative of our music and lyrics. An empty shell that was once flourishing, marking a forgotten life.

6.What are some of the best shows that the band has played so far and how would you describe your stage performance?
In the early days when the band started out, it was just me and a drummer (different from the current one). We played Ralph's Diner in Worcester, MA a few times and had a basket of sour candy and razor blades at the front of the stage for the crowd to dig through. Shows are supposed to be entertaining, and it would be all too easy to just come on stage in cloaks and play through our songs without connecting to the audience or offering them something different than what they may be expecting.

7.Do you have any shows line up for the future?
All our future shows can be found under our Facebook page, that's the best place to look.

8.Currently you are unsigned, are you looking for a label or have received any interest?
Not interested at the moment, enjoying having full control over the creative process and merchandise without any expectations. We make music for ourselves primarily, to look back on when we're old and say that's what I did.

9. On a worldwide level how has the feedback been to the music by fans of black metal?
Similar to how it's been locally. Some love it, some hate it. I came across an online Russian metal forum arguing about what genre we were due to us not having any guitars, similar to the debate I've overheard at our local shows.

10.What is going on with the other musical projects these days?
Steve and Andrew are both in Cryostasium. I (Alx) play bass for Closed Casket, which released a full length in 2013 at the same time as Barren Oak's EP.

11.What direction do you see your music heading into on future releases?
We have a few new songs since this release, the direction is more technicality and despair. One thing that will remain the same is that our releases will always be available online for free download (if you know where to look).

12.What are some bands or musical styles that have influenced your music and also what are you listening to nowadays?
Biggest influences would be Unexpect, Agalloch, Jean Baudin, Dornenreich, and Klabautamann. Listening to Judas Iscariot, Grave Miasma, and Borknagar a lot lately.

13.Outside of music what are some of your interests?
Nature and urban photography, riding bmx, watching Star Trek with my girlfriend.

14.Any final words or thoughts before we wrap up this interview?
Thanks for the interview and for checking out our songs. If you like it, buy it or download it for free

Posted by OccultBlackMetal at 1:17 PM