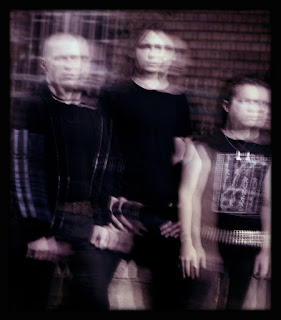 1. Can you give us an update on what has been going on with the band since the recording of the new album?
S: First of all, greetings to the readers. The recording session was finished in August 2015, after that we started to prepare the release including all related background work in order to establish the most appropriate conditions for our new album. I think it was a successful and the most creative era where we had the freedom to approach the core again represented by our aims beyond us as persons. We also had a show as a support act for Mgła which was a new experience on stage and still was a mind-opener from many other perspectives to be honest. In parallel we started to book the forthcoming shows to be performed. So in between things took their shape in the meantime.

2. In April you had released a new album. How would you describe the musical sound that is presented on the recording and also how does it differ from the stuff you have released in the past?
D: Indeed, our new album ‘Storming Voices of Inner Devotion’ is released on 18th April. It was a major step for us in every way compared to the previous works of Svoid. On our previous full-length the songwriting process took place in a so to say ‘metal’ way. The inner content was quite equally solid in every part of songs. It means there were not as many highs and lows, peaks and settling in dynamics.
By composing ‘Storming…’, we examined more traditional writing methods what can help us to express our message in a clearer form. Eventually, our music is evolved a bit but we kept the source and the atmosphere unchanged. It doesn’t matter if blackening void takes form in an underground noisy production or on a pop album. A painting, a weather or even an attic can have the same vibe. That is what we use as well.

3. I have seen the band labeled as 'anti cosmic black metal' but you do have a sound that is different than what most bands of this genre play. Do you feel the ideology is what matters in this term?
S: Particularly, the anti-cosmic term was used since the very early days of Svoid in order to clearly differentiate us from the black metal genre, since we did not want to be a black metal band and we did not want to fulfill any requirements on that manner so to say. We felt that we have more to tell on a wider levels of music, and yes, that was essential from the beginning. The anti-cosmic prefix was there of course to express the ideological context that I felt important to declare, but strictly speaking, this is unimportant to declare. We believe in the divine end beyond the universe which can be the stars, the lurking moon, the abyss between worlds or Death.

4. Your lyrics do cover Anti Cosmic Chaos and Occultism. Can you tell us a little bit more about your interest in the dark arts and left hand path?
S: As I mentioned, the anti-cosmic chaos is only one shape of our void. This vortex is thousand-faced, crosses through the seen and unseen spheres of the Universe, which is limited. On top of that there is only the dissolution, the fading into Nothingness.
There is always searching and most people don’t really find anything at the end. This was true for me as well for a certain period of time when I wanted to break up with my aimless everything I put effort into. I had to grow up to see the heights of doom, in order to set myself free in that sense.
When I started my spiritual studies and self-experience I realized that the ritual work can lead to a mental state where I can see and understand more about things that I was part of without intention. Each of us explore on a certain level using various sources, and for me a primary source was my spirit to be understand. I had deep contact with unknown influences outside myself, so I started to learn to be able to perceive the invisible fires. This was (and is still) a long ride on, but so far I was free enough to delve in my own experience, and handle that as an influence by transforming the released energies into something unseen. Personally this makes me involved in the way how do I express myself.
For this purpose you can use tools, magic if you want, but the flames of demise will destroy the surface, which is false.

5. What is the meaning and inspiration behind the name 'Svoid'?
S: First of all we wanted to express our distance from void, but in the same way the name titles its dimensionless essence. It means the twofold being of Chaos, and our storming voices of inner devotion, which crawls from the same birthplace.

6. Originally the band started out as a solo project but has evolved into a full line up over the years. Can you tell us a little bit more about going into this direction?
S: When I started Svoid, I was in a state of resumption on many different degrees. The most appropriate way to handle my own ideas at that point was to cut the cord, kill the past and build up everything along the nameless approach I used to follow then. It was a short period of time until the first stage-ready lineup was established, first I wanted to unleash this piece of art on stage, nothing else. When the development of the first full-length album started, I felt that I have many more to tell, and so the others involved do, and this was the first step to formulate a creative core by Svoid which was no longer an individual person from that time point. This approach enlightened a common tongue between us and with that sinister confidence I shared the importance with the others. They are acting now as primary members of the band.

7. What are some of the best shows that the band has played over the years and also how would you describe your stage performance?
S: We had overwhelming opportunities on stage during the years. We shared stage with Enslaved, Mayhem, Year of the Goat or Inquisition for instance, which all were great experiences, each for a different reason of course. But we see our appearance as the only engagement to deal with.
With regards to our stage performance, this is also like an evolution. We are constantly evolving in that sense. As we feel more and more in our hearts, we put these influences to be reflected when we are on stage as well. We would like to reach the level if above the every seen the ones in the crowd could approach the depths with eyes wide shut as well.

8. Do you have any touring or show plans for the new album?
S: Yes, we are working on these commitments also, since touring is the only option to express those certain energies which links Nothing to All inevitably. We will celebrate the release of the new album on Walpurgis Night, exactly on the eve when five years before we introduced ourselves on stage. So that night should be there.
Upon that we have ongoing discussions for forthcoming events like Summer festival participation and touring in Autumn, so there are more to come.

9. A year back you had done a cover of Watain's "Devil Blood". What was the decision behind doing your own version of this song?
D: Our single, covering ‘Devil’s Blood’ was released in 2015 before our new album ‘Storming…’ began to take form. We wished to show what ingredients will we work from in our forthcoming era. Let the light rays turn on our idols. No one can portray such sinister and mystical soundscapes like Watain. The crawling of snakes they sound like.
As to that, all this cover version was first born as an experiment how swedish Black Metal atmosphere can be interpreted in our own form which differs from the original, yet keeping the spirit inside. We do not want to sound like predecessors! It is finished and dead in perfection! We want to use this knowledge to create our own offspring.
I don’t mention other influences on our instrument playing, they are clean-cut. One should hear and recognize it, think far back the darkened ages.

10. The new album came out on Sun & Moon Records. How did you get in contact with this label?
S: We are in mutual contact with them since the early days. They received even the first material that we released, and we had a slow but forward-pointing communication in the meantime. They are dedicated fans and doing a successful business as well, and this is a great combination to be honest if a band has such a label. We have the necessary freedom to walk our own path, and they are extremely supportive in each and every sense, so we are looking forward what the future will bring actually.

11. On a worldwide level how has the feedback been to your newer music by fan of black metal?
S: Well, if we take the Watain-single into consideration when talking about our newer music, then this topic becomes more straightforward. We were truly aware that we should not repeat our former materials with the second full-length, and we wanted to add something in order to understand the heart of our music. We wanted to declare how we see darkness in particular and how do we really respect the pioneers of black metal. Most probably ones couldn’t do it more strictly than we did. It was not something for single-minded black metal fans to be honest. It was not something for a repetitive purpose. And people do like it or not. It is either black or white in that sense but definitely not a grey shaped context that we did from acceptance point of view. And this is which clearly separates us from any other labels and titles.

12. What is going on with some of the other bands or musical projects these days that some of the band members are a part of?
D: Although most of us are involved in other bands or projects it’s not relevant in the present context. The spirit of Svoid is not about exposing our human selves, more like being channels of unnamable forces. It’s valid for other things I am in as well nowadays. In other words, we are meant to surface the wisdom we find beyond the ordinary visible world.

13. Where do you see the band heading into musically during the future?
S: I don’t really see that as a certain direction, but as a space with countless dimensions. And there is no a corresponding contour but a thousandfold outline which will be there anyways.

14. What are some of the bands or musical styles that have had an influence on your newer music and also what are you listening to nowadays?
D: It’s difficult to speak of what I am listening to. My tidal waves of hatred ranges against all. I am in a constant search of the atmosphere what I hear inside or dreamed of. I have found fragments of it in hundreds of artists such as Taylor Swift or Moonblood.
Besides it the way I listen to music turned quite automatic. If it has offering for me I store it then go on to the next. This is strictly about reaching the End in every moment.

15. Before we wrap up this interview, do you have any final words or thoughts?
S: Thank you for your attention and submit yourselves to Chaos!

Posted by OccultBlackMetal at 11:38 PM