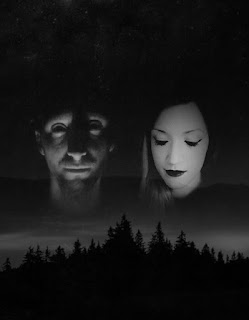 Justin: Astral Path is a two-person Atmospheric Black Metal project consisting of myself, Justin Bourdeau and my bandmate, Ana Dujakovic. We are based in Canada. I live in Ottawa, Ontario and Ana lives in Halifax, Nova Scotia. We met online and I had asked Ana if she was interested in contributing some fretless bass to an Opeth cover I was working on. Ana has multiple musical endeavours going on so, understandably, she had to decline. After finishing the Opeth cover, I asked again if she would be interested in working on a cover together. Initially, we didn't plan on recording an album. We were simply going to record an Ulver cover together for fun. We spoke about our influences and found a mutual love for ABM so we thought it might be cool to write a song together and see where it goes. One song turned into five and now, over a year later, we are releasing our debut album with Avantgarde Music.

We are influenced by a wide array of musical styles. Black metal and other subgenres of metal are our main influences, but we both have a love for well crafted music in general, regardless of the genre. Our album draws off our influences to create a sound that is firmly rooted in black metal, but is mixed with influences from Folk, Post and Ambient styles. We never really tried to stick to a specific sound. Our writing process was more on the spur of the moment, impulsive. This is why the album has a decent amount of tonal variation and the tracks themselves convey different moods. It was a very loose writing process which made it a lot of fun and we think the tracks themselves represent that.

3.Your lyrics deal with a lot of nature and cosmic themes, can you tell us a little bit more about your interest in those topics?

Justin: Science is by far my favorite subject. Contemplating about Earth, space, and the universe is a massive well of inspiration for me. I'm sure almost anyone feels humbled by the universe every time they look up at night. I can't think of any topic that is more interesting than the natural world. From the subatomically small to the unfathomably large, there is always something to be amazed by in the cosmos: objects and concepts that will rock your understanding of reality and existence. Once you think you've seen it all, you get your world flipped on it's head by some new discovery. It's amazing.

4.On the fb page you had referenced Carl Sagan, what kind of impact does he have on your views of the world?

Justin: The first time I watched the original Cosmos: A Personal Voyage series was like revelation for me. I had never seen anyone speak so eloquently about science, preservation and the advancement of technology. Carl is the paragon of science education. Not only that, but he exemplifies such a high level of altruism and humanism that one can't help but be mesmerized by his lectures on cosmology, the search for extra-terrestrials and his dedication to the pursuit of truth. He was absolutely dedicated to education. You could hear it in the way he spoke about science. He wasn't ever acting on Cosmos. What you see is his genuine interest in the subject matter. It was clear that he was fully invested in the future of the human race and the preservation of the Earth. He was also a visionary with respect to space exploration. Sagan forced me to reconsider everything I thought I knew about society and the world. He made a massive positive impact on my worldview.

5.What is the meaning and inspiration behind the name 'Astral Path'?

Astral Path is pretty self-explanatory. In other words, "A path to the stars". Even if mankind manages to avoid self-destruction and the destruction of our home planet for the next five billion years, our sun will eventually die, taking us with it. If we don't look to the stars for a safe haven in some other star system, mankind will be wiped from existence forever. Our survival depends on our ability to expand our horizons, like it always has. We thought that Astral Path was a fitting name for our music and our lyrics.

6.Both of the band members live in different parts of Canada, how does this work during the recording process?

Justin: We did all of the songwriting over the internet, sharing our ideas over Dropbox and Facebook. We were able to finally meet in person last summer. Ana made the long road trip from the east coast to Ottawa where we spent a few days tracking her bass lines. Other than that, this process was facilitated almost entirely through the internet.

7.Currently there are only 2 members in the band, are you planning on expanding the line up in the future or do you chose to remain a duo?

Justin: As it stands, we will moving forward as a duo. We aren't necessarily opposed to expanding the lineup in the future, but it's not on our minds at the moment. We would have to close the geographical gap between us first before Astral Path could become a live band.

Justin: Well, our album is still very new. As I write this, it is still unreleased. Having said that, the feedback that we have gotten from the internet community has been great. People seem to enjoy what we've cooked up and I'm happy. We hope people enjoy the rest of the album once it is released next weekend. We had a lot of fun writing this stuff and if we can get even just a few people to enjoy the record, it will be a success in my eyes.

Justin: We can definitely see another release happening in the near future. We haven't started writing yet, but if I was to guess, I would wager that the approach taken on this record will be preserved. With the way music tastes evolve over time, you might find we throw a curveball or two to keep things interesting. I'm not interested in making 'An Oath to the Void - Version 2" if you know what I mean. I think progression is important for bands to remain relevant. Seeing as both of us are prog fans, you might find we get a bit more adventurous on a future release.

Justin: Some of our influences are very apparent. One of those would be Wolves in the Throne Room. Two Hunters blew my mind when it came out. At the time, I wasn't listening to much of that style of metal so it was a pleasant surprise. I really love the vibe of the tremolo picking creating harmonies between two guitars. Counterpoint is also essential to that sound. You can hear that influence in certain parts of our album more than others. Mare Cognitum also has significance to us. Jacob's work on Phobos Monolith was awesome to say the least. It really set the bar high in terms of atmosphere and composition. Black metal is such a broad genre. There are so many unique sounds and approaches to creating music in this style. Almost any niche musical craving can be found within black metal. My good friend Graham Cwinn actually suggested the Avantgarde roster of bands to me last year, before this project was even rolling. I've been pretty fixated on the Avantgarde releases ever since. Working with Roberto and Avantgarde is just the cherry on top of this musical venture. Sivyj Yar's 'Burial Shrouds' gets a ton of plays as of recently (amazing bass guitar performance). Darkspace and Mesarthim are great bands too. Mgla albums are constantly stuck in my head. Taake is fucking amazing. Hoest blew the doors off my local venue this year. Outside of Black Metal, I absolutely love progressive music. Most recently, I've been listening to the new instrumental guitar-driven progressive metal movement. Intervals, Plini, The Helix Nebula, Gru, Animals as Leaders, and many other artists are doing some really amazing things with the guitar right now. It's awesome to watch these guys break new ground with every release. Like I said before, I'm not picky when it comes to genres of music. All that is required is musicianship. If I can tell your band is good at what you are doing, I'm probably listening to it. Oh, and Guthrie Govan. That dude is amazing.

Ana: My bass playing is heavily influenced by Death which is why I picked up the fretless bass and began exploring other bands such as Beyond Creation, Gorod, Augury, Illogicist, Atheist, Cynic, etc. I listen to mostly black metal though, especially ambient and atmospheric or depressive black metal. My biggest black metal influences would be Spectral Lore, Mare Cognitum, Chaos Moon, Basarabian Hills and Midnight Odyssey. These bands have great synth work too which made me want to have good synth on our album.

Justin: Personally, music takes up the majority of my time outside of work. When I'm not jamming, writing or recording, you can find me cycling in the summer or discussing science with friends. I used to play video games pretty often but I find myself lacking the time (and interest, to be honest) to keep up with modern gaming nowadays. If I am playing any video games, it's probably a racing simulator like Assetto Corsa or Richard Burns Rally. I love racing. Strategy games are awesome too.

Ana: I am a full time student and training to be a registered nurse. Aside from that I play video games, work out and create music. My other band is a darkfolk/neofolk band called Ulvesang. Justin actually did the mastering for us with that project and it's been an unexpected success. I hope Astral Path will have the same fate.

Justin: Well, first of all I have to thank Roberto at Avantgarde music for taking his time to listen to our album and Tryfar for designing our CD package. These guys did an awesome job, the CD package is amazing. These guys are supplying fans with amazing quality releases and we are very grateful to be working with them. Our album artist, Andrew Lachance C created a beautiful piece of art to accompany our music, thanks dude! Jason Jaknunas, our mastering engineer did a stellar job as well. Jason showed me most of what I know about music engineering and production so he gets a big thank you from me! To everyone that listens to even one second of our music, thank you. I hope you enjoy it as much as we enjoyed creating it.

Posted by OccultBlackMetal at 8:49 AM