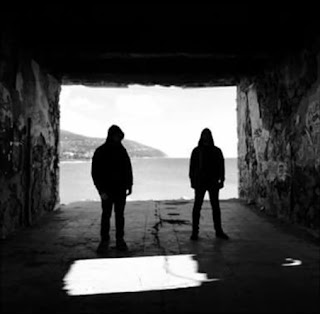 The band was born about three years ago and it's always been me and G. We had a couple of rehearsals with a real drummer, a close friend, but things weren't working well because of the time that rehearsing takes out, so we finally opted for a drum machine and we are happy of the results. We have always listened and played black metal, as well as other genres and being only two people has helped in shaping our sound and made things a lot easier, speaking of recording and writing. When there is a "real" band, with fuor or five members, everything becomes more difficult.


2.Recently you have released your first album,how would you describe the musical sound that is presented on the recording?

The album represents the music that we love, we never intended to be innovative or out of the black metal box, so to say. I think it is black metal as it should be done and, most importantly, music that we like producing and listening to. I'm sick of people labelling their sound with useless adjectives in order to try to be more interesting or for whatever reason they do it. It tooks almost three years to see the album out, so we are glad that the wait is finally over and ready to begin a new chapter of the project.

I wrote all the lyrics, independently from the music, but I must say that the mood produced by the music is a perfect partner for the lyrics, and vice versa. They represents my vision of the world, at least at the time of the composing process, and even though it's not a concept album, the main topic of the lyrics are the struggle of living, a constant feeling of dissatisfaction and of course the awareness, presented as the only gift of time. Someone may see it as a negative vision of life, but I find it as a journey from uncertainty to acceptance of life as it is, you can live it in a bad way or accept it and try to live it in a positive, or at least, in a normal way, without concerns and obsessions.

4.What is the meaning and inspiration behind the name 'Abisso'?

First of all it's a word that I like, based on its etymology and meaning, it can refer to something infinite, both negatively and positively, it suits my lyrics and my point of view of life and world. It may represent the endless void that many of us feels sometime, but also a peaceful sense of abandon and calm. Last but not least, it sounds good and no other band had chosen this name before.

5.Currently there are only 2 members in the band, are you planning on expanding the line up in the future or do you chose to remain a duo?

The band will always be G. and me, and we don't plan to include any other person outside us. As I already said, the less people are involved in a project, the better and faster things go. We have reached a perfect balance between the two of us, so I don't think we will break it allowing somebody else to join us. During the recording of the album, we asked D. (session bass and synth, and also producer) to become a permanent member, because of his musical skills, but he refused. Anyway I would be more than happy if he changed his mind, being a close friend of mine and a great musician.

6.Has the band done any live shows or is this strictly a studio project?

We had our live experiences in the past with our old projects, but we will never play live with Abisso. I personally don't like rehearsing and I don't see our music as a live act, but more as something one can listen on its own, both because of its genre and also for the length of the songs. Also during a live performance, above all for black metal, a lot of the music is lost because of bad sounds, inappropriate amplification and so on. The scene here in Sardinia is alive and constantly produces good bands, but there are not many venues for a gig and also the crowd is usually composed by the same people, mostly friends of the band that is playing, many times the band that brings more people is the band which has more friends.

7.The album was released on Third I Rex, are you happy with the support they have given you so far?

At the moment that I am writing, I still don't have the physical copies of the album, but I think the label is working well and hopefully will make us known more than I would do on my own! I didn't know Roberto before contacting him for Abisso, I only knew his musical projects, but he seems a determined and focused guy, so I am pretty confident.

As I said before, I still don't have my copies, and I think nobody else has them. At the moment it is still very underground, but I hope that the name will be known as soon as possible and I don't care if the full length ends up on torrent or in web hosting sites. I don't want to make money out of it and I don't understand people who are angry when they discover their album has leaked on the internet, I find it as a way to be reached by lots of people, and hopefully appreciated by them.

G. has another band where he plays totally different music, I recently recorded the vocals for D.'s project VIII, and apart from that I am not involved in any other band.

We want to record new music as soon as possible, keeping the soul of the music intact but also moving towards something different. We don't want to repeat ourselves, but we are conscious that we will not produce the next black metal masterpiece or the most innovative album in the genre. As long as we play what we like and the music satisfies us, we will be happy. And that's all we will do, not playing live.

Without writing a "band grocery list", I personally enjoy listening to well produced bands, with a nice sound, with a preference to a slow and bass driven sound, both black metal and not, I still find incredible that so many "old school bm" groups become so well known producing incredibly low fi music, that I find impossible to listen. For sure we love the early Norwegian scene and I am fond of the contemporary Polish (Furia, Mgla, Thaw etc) and French scene (Aosoth and Deathspell Omega above all). Black metal is a big slice of my personal taste, but I also love doomjazz, doom and some classic heavy metal, and of course anything that appeals to my hears, from the most commercial pop to the most extreme drone metal.

I am a big football and professional bodybuilding fan, I love going to the gym, probably because it suits my personality, being an activity that I can do on my own, giving me the possibility to isolate myself, lifting weights and listening to the music that I like. Living in Sardinia I also love going to the beach and swimming. Reading a good book or watching a good movie, independently of their genre, is an activity that I like.

Thank you for the interview and your interest. I want to thank Roberto and Third-I-Rex for the support and all the people that will buy or listen to the record. You will have our news very soon.

https://3rdirex.bandcamp.com
Posted by OccultBlackMetal at 11:51 AM