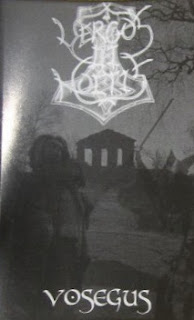 Vergos Di Noctis are a band from France  that plays a very raw, atmospheric and melodic form of pagan/black metal and this is a review of their 2011 album "Vosegus" which was released by War Productions.

Drums range from slow, mid paced to fast drumming with a good amount of blast beats being thrown in, while the synths when they are used bring an atmospheric feel to the music without over powering it and there are a good amount of songs that do not even use the instrument, as for the bass playing it has a very dark tone with riffs that follow the riffing that is coming out of the guitars.

Vocals are mostly high pitched black metal screams with some viking/pagan metal chants being thrown in at times, while the lyrics are written in French and cover dark and pagan themes, as for the production it has a very dark, raw and heavy feel to it.

In my opinion Vergos Di Noctis are a very good pagan/black metal band that brings the classic 90's sound into the modern day, and if you are a fan of this style, you should check out this band. RECOMMENDED TRACKS INCLUDE "Senister" "Matirona' "Ame Celtique' and "Cantolan Druidos". RECOMMENDED BUY.

https://www.metal-archives.com/bands/Vergos_d%C3%AE_Noctis/102866
Posted by OccultBlackMetal at 9:38 PM