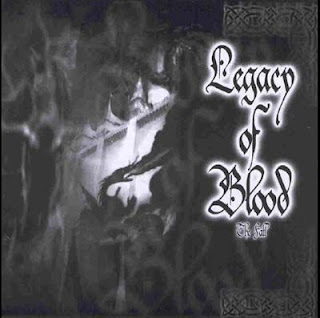 Legacy Of Blood where a band from Poland that played that played a very  raw and primal form of atmospheric ns/black metal and this is a review of their 2003 album "The Fall" which was released by Strong Survive.

Drums range from slow, mid paced to fast drumming with some occasional blast beats, while the synths bring a very dark and atmospheric sound to the music, as for the bass playing it has a very strong and dark tone with primitive black metal riffing that dominates throughout the recording.

Rhythm guitars range from slow, mid paced to fast raw black metal riffing that also utilizes some dark sounding melodies and there are little to no guitar solos or leads present on this recording, as for the acoustic guitars when they are utilized they use finger picking and full chords to give the music a very dark and medieval feel.

Vocals are mostly high pitched black metal screams mixed in with some deep growls and clean singing female vocals with a spoken word passage being used on the last song, while the lyrics cover National Socialism and White Pride, as for the production it has a very dark, raw and primitive sound to it.

In my opinion Legacy Of Blood where a very good and original sounding atmospheric ns/black metal band and if you are a fan of this style, you should check out this band. RECOMMENDED TRACKS INCLUDE "Stronghold" "March Across Europe" "Fatherland" and "Ancient Rights". RECOMMENDED BUY.

Last.fm
Posted by OccultBlackMetal at 4:17 AM