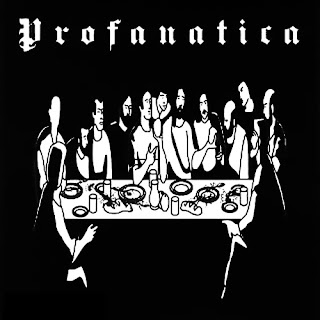 Profanatica are a band from New York that has a long history dating back to the early 90's and are one of the original USBM bands with a music style that I would describe as being raw Satanic/ Anti-Christian black metal with a death metal edge and this is a review of their self released 2000 live album.

Drums range from slow, mid paced to fast drumming with a good amount of blast beats being thrown in, while the bass playing has a very raw and distorted sound with some of the most primitive black/death metal playing.

Rhythm guitars range from slow, mid paced to fast raw and primal black metal riffs that also have a heavy death metal edge to them with some very noisy distortion being used at times while the lead guitars when they are utilized are very distorted sounding black/death metal guitar leads.

Vocals are all high pitched black metal screams with some occasional deep growls being thrown in at times, while the lyrics are very perverted, satanic and Anti-Christian, as for the production on this recording which was recorded live in various locations has a very dark, raw and primal sound to it.

In my opinion this was a great album from Profanatica and if you are a fan of this band, you probably already own this album. RECOMMENDED TRACKS INCLUDE "Spilling Holy Blood" "Weeping In Heaven" "I Arose" and "Tormenting Holy Flesh". RECOMMENDED BUY.


Posted by OccultBlackMetal at 12:16 AM