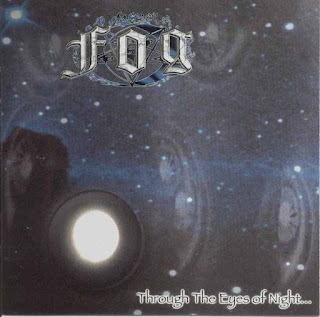 Fog where a band from Fort Wayne, Indiana that played a very raw and brutal form of occult black metal and this is a review of their 2001 album "Through The Eyes Of The Night...Winged They Come" which was released by WWIII Records.

Drums range from slow, mid paced to fast drumming with a good amount of blast beats, while the bass playing has a very strong and powerful tone with riffs that dominate throughout the recording, as for the synths they are only used as an effect occasionally and bring a dark feel to the music.

Rhythm guitars range from slow, mid paced to fast brutal black metal riffing that is also melodic at times, while the lead guitars when they are utilized briefly are very distorted sounding black metal guitar leads with not much in the way of solos, as for the acoustic guitars they are only used briefly to enhance the darkness of the music.

Vocals are all high pitched black metal screams with a brief use of a spoken word passage, while the lyrics cover Occultism, Necromancy, Medieval Mythology And Darkness, as for the production it has a very heavy, powerful and professional feel to the music.

In my opinion Fog where a very good raw and brutal occult black metal band and if you are a fan of this style, you should check out this band. RECOMMENDED TRACKS INCLUDE "By This Axe We Rule" "Whispered Myths (OF Ancient Times)" and "The Storm Unholy"..RECOMMENDED BUY.

Posted by OccultBlackMetal at 2:49 AM