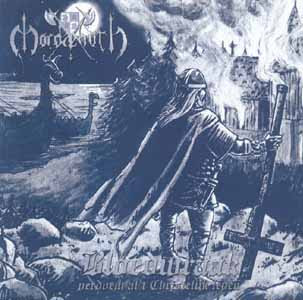 Mordaehoth are a one man band from the Netherlands that plays a very raw and primal form of viking/pagan/black metal and this is a review of their 2000 promo demo "Bloedwraak-Verdoem al't Christeliik Leven" which was re-issued by New Era Productions during the year of 2002.

Drums range from slow, mid paced to fast drumming with some occasional blast beats, while the bass playing sounds very powerful and strong with some primitive sounding black/pagan black metal riffs that dominate throughout the recording, as for the synths they are only used briefly to enhance the darkness of the music.

Rhythm guitars range from slow, mid paced to fast viking/pagan/black metal riffs that are very dark, primitive, epic and raw sounding while the lead guitars are very distorted and melodic  sounding pagan/black metal guitar leads, as for the acoustic guitars when they are utilized they sound very primitive with full chords and arpeggios that give the music a very dark and medieval feel.

Vocals are all grim sounding black metal screams with some pagan chanting and occasional clean singing being used at times as well as some whispered vocals, while the lyrics are written in a mixture of Dutch and English with themes that cover Asataru, Paganism and Anti Christianity, as for the production it has a very dark, raw and primitive sound to it.

In my opinion Mordaehoth are a very good raw and primitive sounding viking/pagan/black metal band and if you are a fan of this style, you should check out this band. RECOMMENDED TRACKS INCLUDE "Walburga's Nacht" and "Wodans Zonen". RECOMMENDED BUY.

Bandcamp
Posted by OccultBlackMetal at 7:37 AM