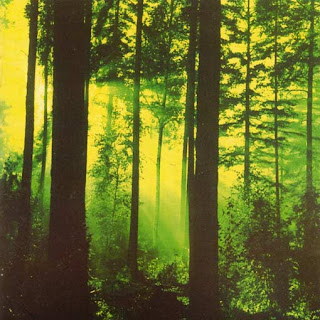 Thy Serpent are a band from Finland that plays Anti-Christian Dark Metal and this is a review of their classic 1996 album "Forests Of Witchery" which was released by Spinefarm Records.

Drums range from slow, mid paced to fast drumming with  some occasional blast beats but not many , while the synths bring a very epic and atmospheric sound to the music, as for the bass playing it has a very strong and powerful tone with riffs that dominate throughout the recording.

Rhythm guitars range from slow, mid paced to fast epic black metal riffing that is very melodic at times and utilizes influences from doom metal, while the lead guitars are very melodic dark/black metal leads that are very melodic, as for the classical guitars they bring a very dark and epic feel to the music.

Vocals are mostly grim and high pitched black metal screams mixed in with some deep growls and the occasional spoken word passage and clean singing vocals, while the lyrics cover the Witches Sabbath and Finish Witchcraft, as for the production it has a very dark and powerful sound and you can hear all of the musical instruments that are present on this recording.

In my opinion this was a great album from Thy Serpent and if you are a fan of this band, you probably already own this album. RECOMMENDED TRACKS INCLUDE "Flowers Of Witchery Bloom" and "Like A Funeral Veil Of Melancholy". RECOMMENDED BUY.

Posted by OccultBlackMetal at 10:50 PM