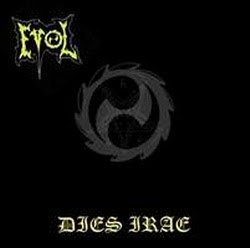 Evol where a band from Italy that played a very dark form of atmospheric pagan/occult/black metal and this is a review of their 2001 demo compilation  "Dies  irae"  which was released by Beyond Productions.

Drums range from slow to mid paced drumming with not much in the way of fast playing or blast beats, while the synths bring a very dark, atmospheric and ritualistic sound to the music in addition on one song there a re some folk instruments utilized that bring a feeling of the dark ages to the music, as for the bass playing it has a very dark tone with riffs that follow the riffing that is coming out of the guitars and at times you can hear the musical instrument.

Rhythm guitars range from slow to mid paced black metal riffing that is very dark and simple sounding with a doom metal feel at times while the lead guitars are very slow and primitive sounding guitar leads that utilize some dark melodies, as for the acoustic guitars when they are utilized they use finger picking to bring a very dark and medieval feel to the music.

Vocals are mostly high pitched black metal screams mixed in with some male and female spoken word ritualistic passages along with the occasional use of deep growls, while the lyrics cover Witchcraft, Celtic Paganism, Occultism and the writings of H.P Lovecraft, as for the production it has a very dark, raw and primitive sound to it.

In my opinion Evol where a very good atmospheric pagan/occult/ritualistic/black metal band and if you are a fan of this style, you should check out this band. RECOMMENDED TRACKS INCLUDE "The Return Of The Horned King" "Sorrow Of The Witch" "Sad Doom Of A Dark Soul(Chutulusumgal's Presence)" and "Witchlord". RECOMMENDED BUY.

Posted by OccultBlackMetal at 12:31 AM