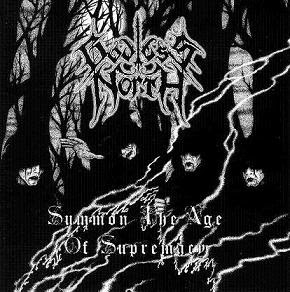 Godless North where a band from Vancouver, B.C, Canada, that played a very raw form of heathen black metal and this is a review of their 2000 album "Summon The Age Of Supremacy" which was released as a joint effort between Breath Of Night and Merciless Records.

Drums range from mid paced to fast drumming with a good amount of blast beats being thrown in, while the bass playing has a very dark tone with riffs that follow the riffing that is coming out of the guitars.

Rhythm guitars range from mid paced to fast black metal riffs that are very dark and raw sounding with some dark and epic sounding melodies being thrown in at times and there are little to no guitar solos or leads present on this recording.

Vocals are all grim sounding and high pitched black metal screams, while the lyrics touch on Heathenism,Paganism and Darkness, as for the production it has a very dark and raw sound to it.

Inmy opinion Godless North where a very good raw and dark sounding Heathen Black Metal band and if you are a fan of this style, you should check out this band. RECOMMENDED TRACKS INCLUDE "Dark Skies Over Vinland" "Upon Heathen Battlefields" and "Wisdom Of The Ancient Cults". RECOMMENDED BUY.

Posted by OccultBlackMetal at 2:51 AM