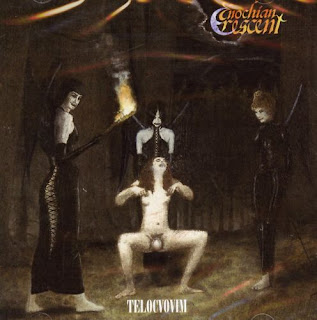 Enochian Crescent are a band from Finland that plays a very raw and atmospheric version of occult black metal and this is a review of their 1997 album "Telocvovim" which was released by Woodcut Records.

Drums range from slow, mid paced to fast drumming with some blast beats being thrown in at times, while the bass playing has a very dark tone with riffs that follow the riffing that is coming out of the guitars and at times you can hear the musical instrument, as for the keyboards when they are utilized they bring a very dark and atmospheric sound to the music.

Rhythm guitars range from slow, mid paced to fast black metal riffing that is very raw with some melodies being used at times as well as influences from other styles of metal in addition there is some brief slow soft playing being used on a couple of songs, while the lead guitars are very dark and melodic sounding black metal guitar leads and solos.

Vocals are mostly high pitched black metal screams mixed in with some occasional ruff doom metal style vocals from the early 90's Swedish era as well as the occasional spoken word ritualistic passage in addition there is a brief use of clean singing vocals being used on one song, while the lyrics cover Enochian Magick, Satanism, Anti Christianity, Chutulu Mythos and Shamanism, as for the production it has a very dark, powerful and heavy sound to it.

In my opinion Enochian Crescent are a very good atmospheric occult black metal band and if you are a fan of this  style, you should check out this band. RECOMMENDED TRACKS INCLUDE "Closed Gates Of Tomorrow(The Cold Harvest)" "A Wolf Among Sheep" "When Tears Run Dry" and "Black Fame Of Satan Burning". RECOMMENDED BUY.

Posted by OccultBlackMetal at 2:19 AM