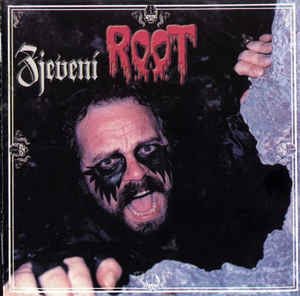 Root are a band from Czech  Republic that where a huge influence on the second wave of black metal with their dark atmospheric occult/satanic black metal and this is a review of a 1999 Cd-Compilation of 2 albums "Zjeveni & The Temple In The Underworld" and we will start of the review with the album "Zjeveni" which was originally released in 1990.

Drums range from slow, mid paced to fast drumming with the occasional blast beat , while the bass playing has a very dark tone with riffs that follow the riffing that is coming out of the guitars.

Rhythm guitars range from slow, mid paced to fast early black metal riffing that had some of the death and thrash metal influences as well as some morbid sounding melodies that the genre had in the mid 80's and early 90's, while the lead guitars are mid 80's sounding black metal guitar solos, as for the classical guitars when they are utilized they use finger picking to bring a dark sound to the music.

Vocals are somewhat grim sounding black metal growls mixed in with a lot of demonic sounding voices and the occasional spoken word ritual passage as well as some clean singing being used briefly on a couple of songs, while the lyrics are written in their native tongue and cover Satanism, Occultism, Lovecraft and dark themes, as for the production it has a very raw and primal sound to it.


In my opinion this was a great album from Root and if you are interests in the roots of black metal, you should check out this recording and this is the best album on this compilation. RECOMMENDED TRACKS INCLUDE "Prisen pro Satana" "666" "Demon" and "Cesta zkazy".

Next up is "The Temple In The Underworld" which was originally released in 1992.

Drums range from slow, mid paced to fast drumming with some blast beats, while the bass playing it has a very dark tone with riffs that follow the riffing that is coming out of the guitars and at times they have a very powerful sound, as for the piano which is only used on the intro and brings a tragic sound to the music in addition there are some dark synths being used on occasion throughout the album.

Rhythm guitars range from slow, mid paced to fast mid 80's to early 90's black metal riffing that also utilizes melodies and traditional  and thrash metal influences, while the lead guitars are very melodic sounding guitar solos, as for the acoustic guitars they bring a dark feeling to the music when they are utilized.

Vocals range from early grim sounding black metal screams mixed in with some clean singing and some spoken word passages, while the lyrics cover Occultism, Lovecraft and Darkness, as for the production it has a very dark and raw feel to it.


Posted by OccultBlackMetal at 10:57 PM