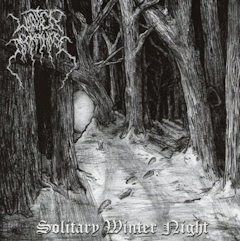 Winter Of Apokalypse are a band from Portland, Oregon that plays a very raw and grim form of satanic black metal and this is a review of their 2004 album "Solitary Winter Night" which was released by Moribund Records during the year of 2004.

Drums range from slow, mid paced to fast drumming with some blast beats being thrown in at times, while the bass playing sounds very dark and strong with some primitive black metal riffing.

Vocals are all grim sounding black metal screams, while the lyrics cover Satanism, Luciferian, Paganism, Anti Christianity and Darkness, as for the production it has a very dark, raw and primitive sound to it.

In my opinion Winter Of Apokalypse are a very good raw and grim sounding satanic black metal band and if you are a fan of this style, you should check out this band. RECOMMENDED TRACKS INCLUDE "Dark Sinistral Path" "True Pagan Hearts" and "Black Metal Of Death". RECOMMENDED BUY.

https://www.metal-archives.com/bands/Winter_of_Apokalypse/29225
Posted by OccultBlackMetal at 1:36 AM