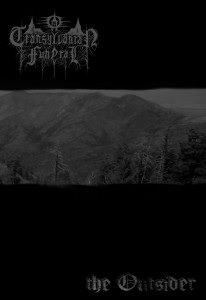 A Transylvanian Funeral are a one man black metal band from Indiana that has also had their music reviewed in this zine and has  been  interviewed in here as well and this is a review of their 2010 album "The Outsider".

Drums alternate between slow to fast drumming that also utilizes a lot of brutal blast beats, while the keyboards are only used on occasion to enhance atmosphere with a little bit of piano playing, as for the bass playing it sounds very powerful with a lot of bass leads that are easy to hear and this is probably the strongest bass playing that I have ever heard on a black metal album.

Rhythm guitars have a lot of fast and mid paced black metal riffing with a little bit of a thrash, death metal and classic influence's and some of the slower riffs have a doomy feel to them with some melody and there  is some open string soft riffs that are used as intros on some of the instrumentals, lead guitars when they are utilized are mostly melodic without a lot of guitar solos.

Vocals contain a good amount of variety with some high pitched black metal screams that have a goat metal edge to them at times, mixed in with some whispered vocals, deep growls and a little bit of clean singing. while the lyrics cover some occult themes that have a left hand path feel to them as well as lyrics about darkness and death, as for the production it has a very raw but professional feel that captures all of the sounds coming out of the musical instruments.

In my opinion A Transylvanian Funeral have made an album that is even better than the one that they put out last year and this is probably one of the most original black metal albums that has came out in the last few years, if you are a fan of brutal and evil black metal you need to get this album in your collection. RECOMMENDED TRACKS INCLUDE "Worship A Dead Fucking Goat" "A Ghoul Rising From The Grave" "Dismembered By Spirits" and "The Outsider". RECOMMENDED BUY.

Posted by OccultBlackMetal at 1:23 PM