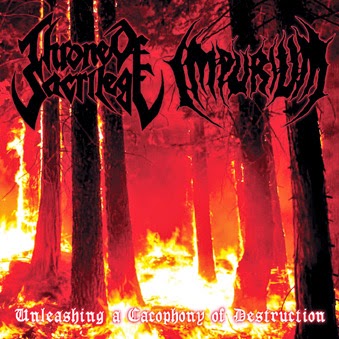 1.For those that have never heard of you before, can you tell us a little bit about the band?
A:  Throne of Sacrilege, formerly known as Impuritan came into existence a few years ago.  Rob contacted me about playing drums for some songs he had written and I offered to play session drums but explained that I was unable to play full time due to other things I had going on and location of members.  So I ended up playing session drums for and producing a 3 song demo for the project.  Shaun then completed all lyrical and vocal aspects for the 3 songs after all the instruments were tracked.  Since then the band has been inactive.

So far this has just been a studio project that I formed in 2011 so that I could record some of my material I wasn't using in my other bands at the time. Butt I'm currently looking for a serious lineup of dedicated people to take it further in the future.

2.Recently you have been a part of a new split album, how would you describe the musical sound of your side of the recording?
A:  I think TOS grabs from mostly 'old school' black and death metal influences.  I'd say it's primarily black metal with touches of death metal and even thrash here and there.  Mostly carrying faster, more pummeling tempos.  Dark Funeral, Satanic Warmaster, Angelcorpse, Asphyx, etc.  Nothing fancy, just a crushing, unrelenting onslaught of powerful, malevolent and epic sounds.

More old school and to the point

3.The lyrics cover some satanic and blasphemous themes, can you tell us a little bit more about your interest in these topics?
A:  Shaun and probably Rob as well could tell you more than I could regarding the lyrical content.  As far as Satanic lyrics and ideology go I do not claim to be a satanist or satanic in any way really.  I was hired to play drums for the music, which I am honored to be a part of and proud of in that respect.  I think the Satanic and or blasphemous ideology behind the 'band' came mostly from Rob's vision of what he wanted it to be and Shaun wrote lyrics based on that.

Shaun Albro, the vocalist on the recording, wrote a lot of the lyrics. I left that part up to his own creative interpatation.

4.What is the meaning and inspiration behind the name 'Throne Of Sacrilege'?
A:  You would have to ask Rob about that.  He changed it to Throne of Sacrilege from Impuritan, which I believe to be a better name for the record.

I was shuffling around a lot of names at the time and this one seemed to make the most sense to me at the time. Throne Of Sacrilege to me just means darkness and evil. As far as inspiration goes I was just looking for a name that stood out and hasn't been used a thousand times before.


5.What are some of the best shows that the band has played so far and also how would you describe your stage performance?
A:  We have played no shows and have none scheduled.  As of now TOS does not have a live lineup.  So far TOS has only existed as a recording project.

The band hasn't preformed live as of yet it is still just a studio project.

6.Do you have any touring or show plans for the future?
A: Not that I am aware of haha.

Yes we would very much like to tour in the future. But first I have to form a solid line up of dedicated people and I'm kind of limited in my resources in my area.


7.Recently you where a part of a split album with Impurium, what are your thoughts on the other band that participated on this recording?
A:  I like Impurium.  Good, heavy old school sounding Death/Black metal.  Interesting listen for sure, doesn't get boring with the nicely blended death and black metal sounds.  I like the production too, sounds raw, evil and heavy.

What they released on the recording was brutal I was impressed.

8.The album was released on Orchestrated Misery Records, can you tell us a little bit more about this label?
A:  Honestly I don't know much about this label besides them being a fledgling label just getting started.  Based out of the midwest, USA.

They have been really helpful with the release and we are apreciative for the oppurtunity to get our music out there.

9.On a worldwide level how has the feedback been to your music by fans of war, black and death metal?
A:  As far as I know most people who like fast, evil music definitely dig the sound.  Not sure exactly how much 'worldwide' exposure we've actually gotten at this point though.

So far most responces have been very positive there have been a few boos from the gallery but that was to be expected.

10.What is going on with some of the other musical projects or bands these days that some of the band members are involved with?
A:  I am currently playing drums in RELENTLESS (doom/heavy metal from Chicago), FIN (black metal from Chicago) and DISFIGUREMENT (death metal from Atlanta).  All 3 bands are currently full steam ahead with writing, gigging and recording.  New full length records in the works for all 3 bands.

I'm involved with another band called Pitch Fork, an old school death metal band. We are currently preparing for our first show soon.


11.When can we expect a full length album and also where do you see the band heading into musically during the future?
A:  That's a good question haha.  Not sure about that considering how many other bands all the members are involved with currently.  I would definitely be behind it 100% if Rob came to me with more songs to record though.  I would imagine new material would sound not too different from the material on the demo although I'm honestly not sure where Rob's head is at with writing these days.

As soon as I can find dedicated musicians. As far as the future goes hopefully we will be louder , faster , and more brutal


12.What are some of the bands or musical styles that have had an influence on your music and also what are you listening to nowadays?
A:  Like I said earlier; Dark Funeral, Satanic Warmaster, Angelcorpse, Asphyx and the like.  As far as my drumming goes I'd say Pete Sandoval, John Longstreth, Derek Roddy, Tony Laureano for this demo.  Just really fast, extreme drumming.  Recently I have been listening to the new Dead Congregation, Solstafir, Bloodbath, Sargeist, mostly just records I am currently mixing though to reference in my car haha.  They Die Screaming, Psychomancer, Spare Change, Cryptic Fog.

Belphegor, Incantation, Black Witchery those are just to name a few

13.What are some of your non musical interests?
A:  Sex, food and partying haha.  Besides those I like good movies, TV shows and the great outdoors whenever I get the chance.

14.Before we wrap up this interview, do you have any final words or thoughts?
A:  Buy stuff from the bands you like! Make sure they know that you love, support and appreciate them! http://orchestratedmiseryrecordings.bigcartel.com/

Nothing else to add would just like to say thanks for the interview.

Posted by OccultBlackMetal at 9:27 PM