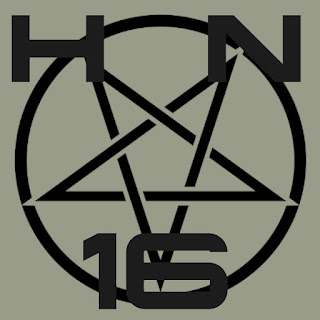 Hi! Hades Nexus 16 is an industrial black metal project that draws inspiration from bleak futuristic visions and bands like Dødheimsgard, Mysticum, Thorns, Aborym and other bands in that vein. I started it in 2020 and all the music and lyrics came out in a very short period of time. It was really a moment of full inspiration and I'm really grateful for that. All the songwriting and recording process was like a sort of trance.

2.So far you have released one album, can you tell us a little bit more about the musical style that you went for on the recording?

This genre was explored in splendid ways during the 90s by the bands mentioned above and other pioneers, and before that the whole industrial movement was vital and full of bright minds that expanded the feelings that some of us get from old machinery movements, vast power plants and the ominous aura that surrounds that kind of things. I was aware when I started that the path was already there, but I wanted to give my personal vision anyway, knowing that I was not breaking any new boundaries and thus keeping my head low before the great names. I tried a mechanized approach to black metal, with a fast drum machine, tons of samples and synths sounds created by studying too much any knob I had before my eyes. The key element for me was to recreate automation, like a Big Machine, a brain-like synthetic organism, that moves and runs for his mysterious plan on another planet, with grease dripping from his parts and green CRT monitors that can unveil some cryptic writings to the watcher. Something cold that is infused by the fire of old religions and superstitions. I used explosions of violence, like exhaust vents of a furnace, with blast beats and more traditional black metal moments, and other eerie parts, more ambient oriented. I think the combination of these two very different moods helped to create a coherent sonic landscape.

3.A lot of your lyrics cover Satanism, Occultism and Anti Christianity themes, can you tell us a little bit more about your interest in the dark arts?

The way humanity has developed its religions has always fascinated me. I have a personal link to Satanism but I don't want to go deep about my personal beliefs and private life. The world behind the curtain is an endless stream of inspiration. Philosophical, motivational, you name it. Even if you don't believe in metaphysical things, it's fascinating to observe the evolution of society around certain myths and rituals. I find it very motivating to try to project those rituals and beliefs in a bleak future full of machines and try to figure out what could happen. The forced evolution of what were once the most revered "creatures" that now have to deal with the power they gave to mortals and to the power mortals gave to artificial devices.

4.What is the meaning and inspiration behind the name 'Hades Nexus 16'?

The name Hades Nexus 16 is an example of what I was saying before. A sum of different concepts: Hades represent the old rituals, the traditional Inferno, the Hell we all know from the old stories. With the word Nexus it becomes a device. A mechanical hub where souls and people and other beings meet. A link between the spiritual and the material plane. The 16 is like a serial number. It suggests that there's more than one Hell and maybe they are all different, but linked together by something superior. Or something like a net of superior things.

The artwork depicts some ancient but at the same time futuristic cranes in a distant world. To me they give us a feeling of estrangement, like something old that was taken to another, completely different setting. And in it I find a perfect allegory of old Gods, born in the beginning of time, that now need to adapt and become something else or bend the knees to new divinities. Even man made divinities.

I play in other bands with other musicians, but it's a little part of my musical output. I really enjoy the total freedom of playing and recording by myself.

7.The psychical version of the album was released on 'Imperatrix Mundi Records', can you tell us a little bit more about this label?

Imperatrix Mundi Records really helped HN16 go out of the dark. I'm really grateful to Rob, the guy behind the label, for giving me this opportunity. They really support the underground and they surely deserve some support back, because everything they get they invest in new projects and releases. Total support to the underground!

I suggest you to go visit the label's Bandcamp page and listen to the other projects: https://imperatrixmundirecords.bandcamp.com/music

8.On a worldwide level how has the reaction been to your music by fans of black metal and industrial?

I have received some really good reviews so far and I'm happy about it. Let's see what the future brings but until now I'm satisfied! HN16 is still a young project, tho.

9.What is going on with your other project 'Feldvehn' these days?

I have recorded the music for five new songs, if I remember correctly, but only guitars and drums. I need to find some inspiration to go ahead and finish what will be a new album. Maybe winter will bring the right mood and inspiration.

10.Where do you see yourself heading into as a musician during the future?

In the underground ahah. I don't want to pursue a "musical career" or something like that. I just want to play and record what I want and when I want, without pressure, and only when I have material that really means something to me. I think that pressure (from labels, fans or from self expectations) kills the creative process. You must record what you want when you want. That's what works for me. But I think that I will record a new HN16 in the near future because new ideas are flowing and I need to find some time to fix them on a track.

I listen to a wide range of different musical styles like extreme metal (grind, death, black), old jazz, punk, ambient stuff, and I think that most of those influences are present in HN16. I'm open to new music and I'm an avid discoverer and crate digger. Sometimes I fix myself on certain genres for months, but I think it's a common thing. Lately I've been listening to a lot of Neil Young but I can't call him a direct musical inspiration ahah. If we want to stay in the black metal territory, I can definitely tell the name of Falhena, another band from Italy. Killer stuff.

12.before we wrap up this interview, do you have any final words or thoughts?

Yes, THANKS a lot for your support and your great review. And thanks to all the people that gave a chance to HN16 and to everyone that listens to the album. Cheers!

https://hadesnexus16.bandcamp.com/releases
Posted by OccultBlackMetal at 5:09 PM