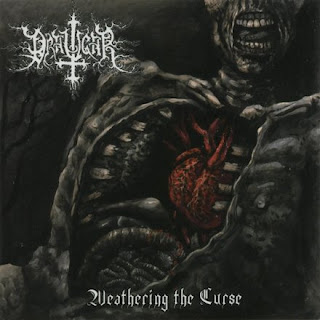 Draugar are a one man band from San Francisco that  plays a very dark, weird and depressive form of black metal and this is a review of their 2004 album "Weathering The Curse" which was released by Moribund Records.

Drums range from slow, mid paced to fast drumming with some blast beats being utilized at times, while the synths have a very weird avant garde experimental/dark ambient feel to them, s for the bass playing which i kind of mixed down low in the mix has a very dark tone with riffs that follow the riffing that is coming out of the guitars.

Rhythm guitars range from slow, mid paced to fast black metal riffs that are very dark with some occasional soft playing being utilized at times, raw and avant garde sounding and there are little to no lead guitars or solos present on this recording.

Vocals are very high pitched black metal screams that also have a very distorted sound to them, while the lyrics cover Darkness, Solitude, Hatred, Absurdity of Existence, as for the production it has a very dark and raw sound to it.

In my opinion this was a great album from Draugar and if you are a fan of this band, you probably already own this album. RECOMMENDED TRACKS INCLUDE "I Come As A Curse" "Trails Of Blood That Lead To Dark Corners" and "Through The Dark Until You Die". RECOMMENDED BUY.

https://www.metal-archives.com/bands/Draugar/11766
Posted by OccultBlackMetal at 10:18 PM