1. Can you give us an update on what is going on with the band these days?
Hello!
At the moment we are promoting our brand-new album titled Via Combusta, which has been released on Darknagar Records. Moreover the band is actively rehearsing and preparing for gigs in the South of Russia supporting the CD. Also we are composing songs for the EP which is planned to be recorded and released in 2013. This opus will set the direction of our creative development.

2. How would you describe the musical sound of the newer album and how it differs from previous releases?
“Via Combusta” means reaching another level of quality for us. Stylistically it is Ethno Dark Metal with Death and Progressive Metal influences. The recording process lasted about two years because of some technical and personal difficulties. Anyway we have done our best on this album. We’ve achieved a higher quality of production in compare with the “Lost in the Depths” CD and used a lot of ethnic instruments such as hammered dulcimer, zurna, some hand drums and percussions... Also we’ve recorded a couple of non-metal tracks which create dark atmosphere on the album. It was a first such experience for us and we are rather pleased with the result!
Another feature of the album is Greek lyrics in three songs (Thanos, thank you for making it possible!).

3. What are some of the lyrical topics and subjects the band explores with the music?
Actually our lyrics are based upon mythological themes and monotheistic religions. But we sing not about mythology or religion as such. All our songs are about contemporary realities and internal search and do not contain retellings of myths and legends. On the other hand these realities are reflected in myths and legends and we only draw an analogy between them.

4. What is the meaning and inspiration behind the bands name?
'Atra Hora' (Latin) means 'Black Hour'. This title was offered by the member of the band with which we shared the rehearsal room. We accepted it as it most closely suited to describe our perception of the world and the modern epoch.

6. Do you have any touring plans for the new release?
Yes, as I’ve already told you, we are preparing some shows in . But we do not want to limit ourselves with local gigs and we would be glad to play abroad if we have an invitation.

The fact is what we haven’t played live for about two years. It is too fucking bad, but we have had a lot of line-up changes during this period. Another trouble is what it is almost impossible to find session musicians for live shows in our region... that is why we had to concentrate on studio work for a while. But now we have a complete line-up and are ready to continue our live activities!

7. On a worldwide level how has the feedback been to your newer music by metal fans?
Positive in general. I receive letters from metalheads from CIS, Europe, and Middle-Eastern region and they find our style interesting. I would like to thank anyone who supports us by ordering our CDs or simply telling kind words about our music!

8. What is going on with the other projects these days?
Yanis (guitars, back vocals) and I are also involved in Tristesse Aeternum. It is a Depressive Dark Metal studio-project, which has already finished recording sessions of the debut full-length album titled “The Curse”. Now we are searching for a designer who could make an artwork for the CD.

9. What direction do you see your music heading into on future releases?
We do not want to play the same music constantly. Each our album has its own style and sound. The first one was a mixture of Black and Death Metal, the second one is more Atmospheric Dark Metal, on the third we want to achieve more aggressive Death Metal sound. Our music depends on our liking: we are extremely sincere to ourselves and to our fans, we play what we want to play. One thing is for sure: our music will always contain a lot of oriental melodies and sounds of ethnic instruments.

10. What are some bands or musical styles that have influenced your music and also what are you listening to nowadays?
Talking about influences it is difficult to cover all of them. It is the classical metal, the 80-90ths extreme underground, ethnic, classical and electronic music. In short, it is everything from Renaissance and Baroque music to Grindcore, huh. If we talk about artists I would like to highlight Death, Morbid Angel, Rotting Christ, Septic Flesh, Horrified, Paradise Lost, Anathema, Porcupine Tree, King Crimson and Dead Can Dance and Daemonia Nymphe.

11. Outside of music what are some of your interests?
Yanis studies religious systems and esoteric doctrines and sometimes tries on a variety of grueling practices. Genrih enjoys hunting and jeeping. Nicolaos likes cooking and studying eastern martial arts. Alexander engages in melee fighting, studies Russian history and enjoys numismatics. I own Darknagar Records label; it takes almost all of my efforts and time. Sometimes I study regional geography and culture.

12. Any final words or thoughts before we wrap up this interview
Support the metal scene around the world in any possible way! Spread news about your favorite artists, buy CDs, visit shows or simply contact musicians and write a line about their music. It always means much! I wish you peaceful sky over your head and tons of great music! 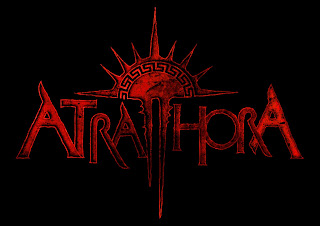 Posted by OccultBlackMetal at 8:20 PM