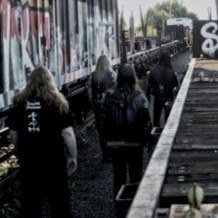 1. Can you give us an update on what has been going on with the band since the release of the new album?
Well, since it's just recently released, we haven't been having any time to do much. The plan is to first let this album settle, and then start the process of writing the next release. We have a great hunger for more.

2. Recently you have put out a full length album, how would you describe the musical sound that is presented on this recording?
If you take a blender and put in a whole lot of Scandinavian style black metal, add a pinch of old blues and country. Top it off with a fistful of fury!
It's really, really hard to describe Cursed 13, many have tried but they all failed. And so will I if I seriously try.

3.What are some of the lyrical topics and subjects the new release explores?
The lyrics have been written over a time span of 15 years so they vary alot obviously. Mostly they deal with topics of aggression and destruction. Some have a more war like theme while others are of a more spiritual nature. Hatred and contempt are the key words.

4.The band started out as Cursed 666 but changed the name to Cursed 13, what was the decision behind the name change?
Yes, that is correct. I was a teenager and had a more uneducated view upon existential topics and I had some belief that I had to prove some point already in the bands name. An interesting fact is that the number 13 started to follow me everywhere. Shit happened on the 13:th of the month or at 1300 hours. If I was to go to some appointment I could be fucking damned that it would be on number 13 of the street. All that kinds of shit. It was like in that film "number 21" or whatever it was called. All in all I changed to Cursed 13 since it also has a better numerical value when it comes to the spiritual side of things.

5.What are some of the best shows that the ban has played so far and how would you describe your stage performance?
We have actually only played live with Cursed 13 once this far. It was at a black metal festival in northern Sweden called Forlorn Fest.
I would describe us as aggressive, old school, energetic and in your fucking face. The music and message of Cursed 13 fits the stage perfectly and we are not new in a live sence (even though we haven't been out much with Cursed 13 yet) since we have been doing shows with bands like Grá, Spazmosity etc for a long time. Heavy as a freight train and bad to the bone!

6.Do you have any touring or show plans for the future?
Not at this exact moment. We are looking into it and are open for any suggestions you or your readers might have. Contact us at: kvalshop@gmail.com if you have any great ideas!

7.The new album came out on Carnal Records, can you tell us a little bit more about this record label?

Carnal Records have always been knows for quality in my eyes. They have released great material with bands like Arckanum and Craft for example. They are underground but very serious and we feel very well taken care of! I recommend you all to have a look at their back catalogue, it's impressive and filled with extreme amounts of quality.

8.On a worldwide level how has the feedback been to the music by fans of black metal?
Over the years it has been great! With this new album, we are just about to find out since it's still brand new on the shelves. I suspect that some will not understand it while others will completely love it. It is not the ordinary black metal album to say the least.

9.What is going on with the other musical projects these days?
We have just recruited a new live guitarist for Grá and are rehersing for some upcoming shows in Sweden. Domgård is working on a new EP, WAN just released an album on Carnal Records. Other than that it is quite silent right now. But the summer is over now and with the cold winter comes inspiration...

10.What direction do you see your music heading into on future releases?
That's a damn difficult one to answer. I have a couple of ideas for new songs and they are experimental to say the least. We prefer not to have boundaries but to roam free, to let the beast guide us. The next release can head in several different directions. We'll just have to wait and see. My mantra regarding Cursed 13 has always been; Patience is a virtue!

11.What are some bands or musical styles that have influenced your music and also what are you listening to nowadays?
I'm actually listening to the new Carcass album right now and I must say that I miss the rock n roll parts from the Heartwoork and Swansong era. Always prefered that over the blast beat stuff. I listen to alot of different genres and I try to stay as wide as I can. One day I can be absolutely absorbed by The Doors or Johnny Cash and the next day I can be completely into old Greek 90's black metal for example. If you only let inspiration come from one source, you will not be able to evolve.

12.How would you describe your views on Occultism, Satanism and Paganism?
To completely describe my views on them I would need to write a book but in short I see myself as a practiser of all three of the -isms (since they are in several ways the same), or more specific; the dark aspects of them.
I am a religious man. To go further on this subject would mean that I wouldn't know when to start and where to stop. Please read my lyrics in Cursed 13 and also in Grá if you want a deeper insight on how I see things.
I will gladly answer any questions about them.

13.Outside of music what are some of your interests?
I am very interested in ancient history, religion and mythology. I also like to leave civilization and just roam the nature which we have plenty of here in Sweden.
I have spent many days and nights in the car, on the way to go and see some runestone or the like. There's so much history lying around in the open. You just have to know where to look.
Take care of your local treasures, tomorrow someone might build a road there or even worse, a church...

14.Any final words or thoughts before we wrap up this interview?
Thank you for the time.
Salute to you who understands what we are doing.
Hell Chaos!
/Heljarmaðr on behalf of Cursed 13
Some basic band contact etc:
Website: www.cursed13.com
Facebook: https://www.facebook.com/pages/Cursed-13-Official/478871268804066
Youtube channel: http://www.youtube.com/channel/UCCccUAhlj0XRw2bUwXATe0w
Soundcloud: https://soundcloud.com/cursed-13-official
Posted by OccultBlackMetal at 11:30 PM