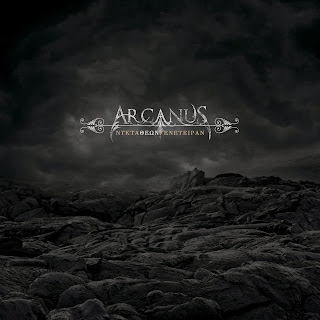 1.For those that have never heard of you before can you tell us a little bit about the musical project?
The project was on my mind for a while. Some personal facts that happened in my life a couple of years ago
helped Arcanus come to life. So, the songs came together very easily and during the summer of 2012 started recording the album.

2.How would you describe your musical sound?
Of course the roots of the album stem from black metal, but I also wanted to incorporate some avant garde and atmospheric elements to my music.

3.According to the fb page the band covers Greek Mythology in the song writing, can you tell us a little
bit more about your interest in this topic?
Mythology plays a big part in Hellenic culture, so it has always been around the album though covers a specific myth, the myth of Lykaon, the first king of Arcadia. The myth says that when the god Zeus visited Lykaon, he and his sons offended Zeus by feeding him human flesh so that them could see if he was truly divine. The god furious killed his sons with lightning bolts, and turned him into a wolf. Gaia though saved one of Lykaon sons Nyctimos. The myth has to do with the relationships between Gods and Humans.

4.What is the meaning and inspiration behind the name Arcanus?
Arcanus is an ancient Hellenic word. It's meaning is something secretive, dark, it has to do with underworld. My place of origin is Arcadia which is the same root as the band's name. It has been the center of several mythologicalrituals in ancient times and is the birthplace of the myth of Lykaon.I give Basis to the artwork . The logo and the artwork for the demo were not done randomly. The artwork was done by Ethan Ziokas (Ethanworks).

5.Currently there is only 1 member in the band, do you feel you are allowed to be more creative with
your music this way?
Definitely, for I have full control over all creative aspects of the project. Arcanus is a very personal project, so the fact I can play all the musical instruments give's me that advantage.

6.Currently you are unsigned, are you looking for a label or have received any interest?
Starting off the project was more personal and therefore I delayed putting it out, but now having new
material on the way I am in search of a label.

7.On a worldwide level how has the feedback been to your music by fans of black metal?
It has been very positive. They seem to connect to my music even though '' ΝΥΚΤΑ ΘΕΩΝ ΓΕΝΕΤΕΙΡΑΝ'' has a more death metal sound due to the fact it was recorded at Infected Studios by George S. (Mass Infection). They especially liked the demos intro that was very experimental.

8.Are there any other musical projects besides this band?
I also am the Bass player for the epic/melodic Death Metal band ''The Shadeless Emperor''. There is already a demo out and in a very short time we will be in the stydio recording our full length album.

9.What direction do you see your music heading into on future releases?
Who Knows! Black Metal will always be an unexplored path without restrictions. The next album will be a lot more atmospheric and will remain at low-mid tempo.

10.What are some bands or musical styles that have influenced your music and also what are you
listening to nowadays?
Of course it all stems from Heavy Metal. Now days I listen to more classic types of music like Jazz, Ambient, and I also listen to movie soundtracks  due to the fact that I also write music for movies.

11.Outside of music what are some of your interests?
My interests involve reading History, Mythology and Philosophy and watching old school movies. And I am also getting my Degree in Music engineering.

12.Any final words or thoughts before we wrap up this interview?
Just that I am glad the internet has to provide blogs and pages that help promote artists and musicians like myself.
Keep up the good work so that we can find new bands with new ideas.

Posted by OccultBlackMetal at 4:41 PM