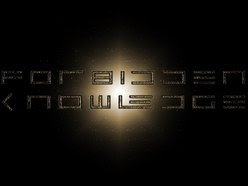 1.For those that have never heard of you before, can you tell us a little bit about the musical project?
This project was created back in 1996 under the name of Tyranny with four other members. I was 16 years old at this time and I was discovering the black metal scene.
years past and I felt a urge to introduce tons of new ideas and concepts to this project but my musicians feared the way I could transform the band. many left and many were introduced to us during the following years but nothing had changed so I decided to end this project and started a fresh one. That's how Forbidden Knowledge was born. This one man project is my vision of the infinite possibilities and the unlimited.  The concept is based on a dark multi-dimensional world fueled with secret conspiracy theories, manipulations, distorsions and lies. It explores everything that is hidden to the public scene or considered secret or even forbidden. It's the wikileaks of music. A huge reservoir of the most atrocious behaviors of the so called rulers of the world.  The dark dormant secret fantasies of the elite put on lyrics and music. The arcana arcanorum and the secretum secretorum revealed.
2.You have so far put out 6 releases, can you tell us a little bit more about your musical sound and also how has it evolved over the years?


Back in 1996, Forbidden Knowledge had a clear crisp sound along the lines of battles in the north from Immortal but it fastly switched with heavier frequencies
when I decided to buy a seven strings guitar. The best way to describe it today is a perfect match balance of loud/aggressive and clear/tight sounds. I love to create sound effects and mix them with my music. It gives a dark ambience to the record.
3.According to the Reverbnation Page, there has been releases going as far back as 1996 and there seems to be a few years of gaps between each album, can you tell us a little bit more about these gaps?
I have build a home recording studio in 2001 and I have recorded tons of musicians and bands. I had to create a time-balance between my band, my side projects and my studio production. That explain the gaps.
4.The lyrics seem to be well researched in occult topics, can you tell us a little bit more about your interest in the various forms of occultism?
I have spoken with many people in my life that were members of secret organizations, some good, some evil. I remember a day when I set a 45 minutes phone call  with a 33rd degree freemason. We had a discussion about philosophy, occultism and many other fields but my goal was to extract precious informations from him.
informations that shall be kept secret inside the organization. At the end we were talking about the possibilities of black magic stuff and orgies that were evolved inside freemasonry and he became anxious and hung up. At this point I was conscious that this guy had opened a door on the real goal of his organization and I knew I had to dig further into the occult and the elite circle. I started sharing documents on the web with occult organizations and I have also stolen many documents and this was my inspiration to create years later Forbidden Knowledge. People have the right to know what's going on and sometimes truth is stranger than fiction.
5.What is the meaning and inspiration behind the name 'Forbidden Knowledge?
Forbidden Knowledge is the key informations that is maintained secret from various occult organizations and wealthy people and my goal is to bring it to light.
The more I learn the more I realize that the human nature can be sick as hell. This project is a filter to all these monstrosities.
6.Currently there is only 1 member involved with the project, do you feel this is a better way of bringing your vision to the music?
Yes of course. You can't pick a fight with yourself ! No seriously, I would love to recruit musicians and make forbidden knowledge a live band.
I am a very opened-mind person and this project has tons of styles mixed up together. There are so many talented musicans on this earth.
Maybe one day I'll find some to join my project.
7.You have a good amount of many different record labels listed on your website, do you feel these labels have done a lot for getting your music out there heard and promoted?
Some of them did a great job but what has gave me a push was the creation of a website 3 years ago called Holographic Universe Productions to help bands and musicians that are maintained in the shadow. I create promotions for these bands and it's totally free. Bands can subscribe anytime ; http://www.reverbnation.com/label/holographicuniverseproductions
8.On a worldwide level how has the feedback been to your music by fans of black metal?
I have had numerous feedbacks on my website. None of them are negative and it's always a pleasure to share and discover other musicians.
9.Are you currently involved with any other musical projects besides this one?
Yes. I have been working on multiple side projects during the past years like Nuclear sentence and Reign of Emptiness,
I am presently working on a side project called Lust 666. This project will focus on a more classic metal style but fueled with extreme agressivity,
10.What musical direction do you see this project heading into music wise during the future?
I never see what the future can hold and prefer live in the present.  I don't believe in destiny but only in what I can create for the moment. More than once I had concepts in my mind
but they all shaped in a totally different ways when it was time to materialize them on a recording process.
but if we are talking about the possibilities that Forbidden Knowledge could reach an higher audience, I would say that it is my biggest wish.
11.What are some bands or musical styles that have had an influence on your music and also what are you listening to nowadays?
I'm that kind of old school guy sticked with classic metal records but the biggest influence that had an impact on my musical structure goes back in 1998 when I first listened
to the genious hungarian composer Bela Bartok. At this time I had discovered unlimited ways of expressing myself musically. The few bands that had the most influence on me are Beherit (the oath of black blood) Immortal (battles in the north) Possessed (seven churches) Kreator(pleasure to kill) and Morbid Angel (covenant)
12.Do you have any non musical interests?
I'm a hardcore gamer. I've always been a huge fan of the Thief series on pc. I'm still playing Thief Gold today with some mods added and I can't wait on february 25th for the reboot of this franchise. Besides that I love nature, photography and discover new destinations on earth.
13.Before we wrap up this interview, do you have any final words or thoughts?
thank you Occult Black Metal Zine for this interview. I wish you the best in the future. Longue vie à toi.
I encourage people to visit my webpage on reverbnation : www.reverbnation.com/forbiddenknowledge
and don't forget to subscribe your band to my label
http://www.reverbnation.com/label/holographicuniverseproductions
mp3 downloads : www.songstall.com/forbiddenknowledge
Posted by OccultBlackMetal at 2:34 PM