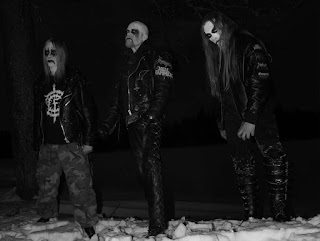 1. For those that have never heard of you before, can you tell us a little bit about the band?
MALPHAS: HAGL started up as just an idea late 2010, when I had a lot of very good riffs and melodies I didn't feel like could fit the other bands I played in. In early 2011 I started up creating songs, and contacted Sorath. The only thing I could interest him with was the name of the band, and the songtitle "Askefast". He was very interested, and from that point we were a three piece band. Me and Gheist have been friends for a long time, and it was only natural that he would play drums on the record, as he completely fits this band in all ways.

2. In March you have your first album coming out, how would you describe the musical sound that is presented on the recording?
MALPHAS: The sound on the album is very dark, disharmonic and still yet melancholic. We went for a more clean sound as there is a lot of details that I want the listener to pay attention to. This is songs you really have to listen to many times to really catch what's really going on!

3. All of the band members have experience playing in other bands, what are you able to do with this band that you are not able to do with your other groups or projects?
MALPHAS:  Since this is a new band, its more easy to make something new, since there are no previous records behind us. Especially since we all wanted to do a so-called slow record that keeps the tempo and yourself down at all times. And on this record, all spoken words are in Norwegian, that's something we all have never done before.

4. What are some of the lyrical topics and subjects the band explores  with the music?
SORATH: The core of the lyrics is nihilistic darkness; a black mass of suicide, deathglorification and hopelessness, with a strong message that each individual is worthless and doomed from birth.

5. What is the meaning and inspiration behind the name 'Hagl'?
MALPHAS: The word 'Hagl' is norwegian for the weather phenomenon hail. I wanted a Norwegian name for the band, and I am fascinated with hailstorms. Hail can be pretty brutal sometimes, and have killed several people.

6. Has the band done any live shows or is this strictly a studio project?
SORATH: We are not entertainers, but when the time is right, we will appear on stage. As of now, despite several offers, we wait...

7. The new album is going to be released on Folter Records a label that has been a part of the underground since the 90's, how did you get in contact with this label?
MALPHAS: I met with Joerg at the Under The Black Sun festival the last summer, where I played with Endezzma and So Much For Nothing. We all had a blast, and when I came back I stayed in touch with him, and told him about this band I had. He was really interested in doing this, and everything has been handled very professionally.

8. On a worldwide level how has the feedback been to your music by the black metal fans that have heard it so far?
MALPHAS: We have stayed very low about this, and recently opened a Facebookpage. The feedback has been very good, it seems like many looks forward to give this record a listen. The music takes you back to the old days, with solid melodies and riffs, and when the groove mattered - not how fast a band could play.

9. What is going on with some of the other bands or musical projects these days that some of the band members are apart off?
MALPHAS: Endezzma will release a new record(Arcane Abyss) in a few months.
SORATH: We're also working together on the last Beastcraft album (The Infernal Gospels of Primitive DevilWorship) and 10" (Occult Ceremonial Rites),  and I've also started preparing the recording of the next Vulture Lord album with Diabolus.

10. Where do you see this band heading into musically during the future?
MALPHAS: We will continue to keep it down, bringing utter darkness to the listener. Expect solid riffs, disharmoy, death chants and a good groove! We have very good ideas and plans for the future.

11. What are some of the bands or musical styles that have had an influence on your music and also what are you listening to nowadays?
SORATH: All our influences comes from the dark past, the beginning, the filthy purity. As we move through time towards the end, we bring those black decades with us,  creating utter darkness. The future lies in the past.

12. How would you describe your views on Occultism?
SORATH: That has been an important part of my life for over 20 years. The search for what lies beyond. The borders I have crossed, the sights I have seen and the borders I have crossed shall remain within my circle and lyrics, but I can say as much, that I am fearless of dying.

13. Before we wrap up this interview, do you have any final words or thoughts?
SORATH: Hail the underground and keep the black flame burning!

Posted by OccultBlackMetal at 9:41 AM