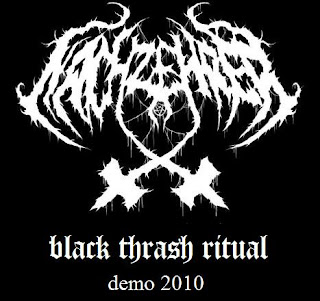 Nachzehrer are a band from Boston, Massachusetts that plays raw black metal with black/thrash influences and this is a review of their 2010 demo "Black Thrash Ritual".

Drums mix some slow to mid paced drumming with a lot of fast playing and brutal blast beats, while the bass playing is all rhythm bass that follows the riffs coming out of the guitars and at times the instrument sounds really powerful with a lot of thrash influences.

Rhythm guitars have a mixture of mid paced and fast raw black metal riffs mixed with a lot of thrash riffing and a small dose of slow doomy parts, while the lead guitars utilize a lot of brutal solos that have a primitive black/thrash feel.

Vocals are mostly high pitched black metal screams while the lyrics touch on war, chaos, death and anti christian themes, as for the production on this demo it has a very raw, heavy and primal feel.

In my opinion Nachzehrer are a very good band that mixes black/thrash with raw black metal, and if you are a fan of both styles you should check out this demo. RECOMMENDED TRACKS INCLUDE "Incestual Demoncy" and "Plague Bearer: Death March Commerce". RECOMMENDED BUY.

Posted by OccultBlackMetal at 12:52 PM