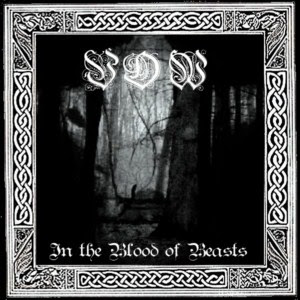 Vow are a band from Philadelphia that has had another cd reviewed in this zine and this is a review of their self released 2009 album "In The Blood Of Beasts".

Drums are mostly fast with a lot of brutal blast beats, while the keyboards just like their previous work are only used to enhance atmosphere and ambiance, as for the bass playing it is mixed down low in the mix follows the riffs coming out of the guitars and at times there are some very powerful bass lines.

Rhythm guitars are mostly mid paced to fast primal black metal riffs that have an mid 90's European feel that have a depressive edge at times with a good amount of melody that also has thrash and death metal influences, while the guitar solos are very distorted and melodic sounding with a dark ambient edge, as for the acoustic guitars they use open chords and finger picking to give the music a darker and more progressive edge.

Vocals are mostly high pitched black metal screams with some deep death metal growls thrown in and some spoken word and clean singing female vocals, while the lyrics seem to be very philosophical, nature orientated and anti christian, as for the production on this album it has a very dark, raw and primal sound.

In my opinion this is another good album from Vow and if you are a fan of underground atmospheric black metal you should check this album out. RECOMMENDED TRACKS INCLUDE "In The Blood Of Beasts" "The Sheep Come Armed" and "Through Flesh". RECOMMENDED BUY.

Posted by OccultBlackMetal at 11:11 AM