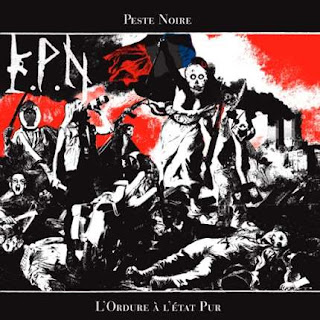 Peste Noire are a band from France thast plays a very weird from of raw and depressive black metal and this is a review of their 2011 album "L'Ordue a I'etet Pur" which was released by La Menie Herlequin.

Drums range from slow, mid paced to fast drumming with some blast beats, while the folk instruments give the music an European folk music feel and at times there is an industrial feel to the music, as for the bass playing it sounds very powerful with a lot of heavy riffing that is influenced by a variety of many different music genres.

Rhythm guitars range from slow, mid paced to fast raw and depressive black metal riffs that also take influences from many different forms of music and at times they have a psychedelic feel to them, while the lead guitars are very melodic and skilled black metal leads, as for the acoustic guitars when they are utilized, they bring an avant garde French folk music feel to the music.

Vocals are mostly high pitched depressive black metal screams with some occasional clean singing female vocals being used on one song as well as come occasional spoken word passages in addition there are some clean singing male vocals being used on the last song, while the lyrics are written in French and cover Desperation, Ugliness, Nationalism, and Poetry, as for the production it has a  very dark, heavy and raw one to it while still being professional enough up to the point where you can hear all of the musical instruments.

In my opinion Peste Noire are a very good and original sounding depressive black metal band, and if you are looking for something that is different in this genre, you should check out this band. RECOMMENDED TRACKS INCLUDE "Casse,Peches Fractures et Traditions" and "Sale Famine von Vaufoutre". RECOMMENDED BUY.

https://www.metal-archives.com/bands/Peste_Noire/12841
Posted by OccultBlackMetal at 5:41 PM