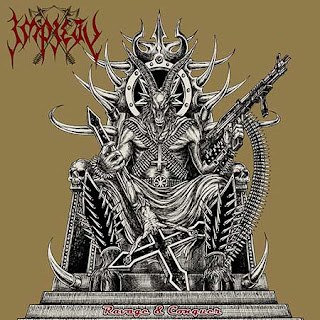 Impiety are a band from Singapore that has had one of their previous recordings reviewed in this zine a year back that plays a style that mixes the most brutal and blasphemous elements of war, black, death and thrash metal together and this is a review of their 2012 album "Ravage And Conquer" which will be released by Pulverised Records on 4/2/12.

Drums range from mid paced to fast drumming with a great amount of brutal sounding blast beats being thrown into the music, while the bass playing has a very dark tone with riffs that follow the riffing that is coming out of the guitars.

Rhythm guitars range from mid paced to fast riffs that combine the most brutal elements of war, black, death and thrash metal together while the lead guitars are very chaotic sounding black/death metal guitar solos and leads that have an early 90's underground metal feeling to them.

Vocals are a mixture of high pitched black metal screams and early 90's style black/death metal growls, while the lyrics cover satanic, anti christian and war themes, as for the production it has a very strong, powerful and heavy sound to it.

In my opinion this is another great album from Impiety and if you are a fan of this band, you will enjoy this recording. RECOMMENDED TRACKS INCLUDE "Weaponized" "War Crowned" and "Salve The Goat". RECOMMENDED BUY.

http://www.facebook.com/impietyofficial
Posted by OccultBlackMetal at 5:54 PM