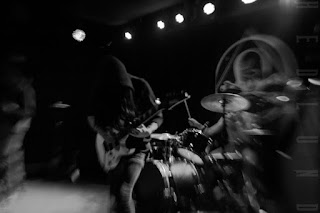 1.For those that have never heard of you before can you tell us a little bit about the band? G. : We are just two guys who’ve played music together for a long time. We eventually concretised our ideas and formed Eos. V. Eventually joined the band last year as our new bass player.
2.Recently you have released a demo, can you tell us a little bit more about the musical sound that is presented on the recording? K. : Through many rehearsals, we’ve built songs with what sounded good to us. We wanted to do black metal but as we were building the songs, un-black metal ideas like dronish soudscape, more mid-tempo/clean part, and so on, came to our mind and we though it sounded good to mix it altogether.
3.Can you tell us a little bit more about the lyrical topics and subjects the band explores with the music? G. : There wasn’t any specific topics or subjects in our lyrics for L’avalé. We’ve focused more on the musical content. We are currently working on it for the next release. K. : As he says, we were more focusing on the music though we’re working on something more specific for our our next release. Something more in the way of « Avalé »’s lyrics, which to me describe a strange way of thinking where our most meanful feeling even our casual act. The beauty and the ugly can be reduce to nothing and become useless.
4.What is the meaning and inspiration behind the name 'Eos'? K. : Actually, it’s the title of an Ulver’s song on their album « Shadows of the Sun » which is related to the goddess of the dawn in the greek mythology, but in our case, it’s related to the Ulver song.
5.Has the band done any live shows yet or have any plans on doing shows in the future? G. :We are planing to do our first live rituals by the beginning of 2015. For now, we are rehearsing the songs on L’avalé.
6.A year back the band was a part of the 'Svn Okklt' compilation, what are your thoughts on the other bands that have participated on the compilation? G. : I really liked the compilation and discovered some great projects, such as Axis of Light, Death Fortress and Tardigraada. Each tracks were excellent. K. : Same here.
7.The demo was released on Fallen Empire Records, how did you get in contact with this label? G. : They’ve contacted me about the SVN OKKLT compilation. They wanted a Wendess’ track, but we didn’t had any track to contribute. I then suggested Eos since we were already in the process to record some demo tracks, which led to the Katharsis track on the compilation. Mike is a great guy to work with and we hope it will be a long partnership.
8. On a worldwide level how has the feedback been so far to your music by fans of black metal? K. :We’ve received many positive criticism and few negative comments and that’s fine. We didn’t expect that so much people were waiting for our release, considering we only had one song released yet.
9.Where do you see the band heading into musically during the future? K. :We are not heading anywhere specific. We want it to keep it Black Metal, but we don’t want to put ourselves any boundaries. It will surely be darker and heavier. The future will tell us, we don’t want to look too far ahead.
10.What are some bands or musical styles that have had an influence on your music and also what are you listening to nowadays? G. :Black metal, progressive music. Nowadays, I listen a lot to Swans, Deathspell Omega and The Ruins of Beverast. K. :Black metal, old prog, shoegaze, folk, drone, doom, noisy things, Sonic Youth.
11.What are some of your non musical interests? K. : Food, beer, dark movies, old obscure video games.
12.Before we wrap up this interview, do you have any final words or thoughts? G. : We appreciate the interest toward our project. We have a Facebook page if anyone wants to follow us. https://www.facebook.com/eosmetalnoir

Posted by OccultBlackMetal at 10:46 PM