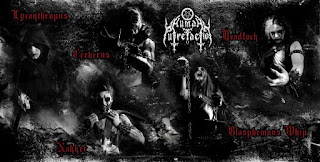 1.Can you give us an update on what has been going  on with the band since the recording and release of the new album?
H.P.: In the mean time, the pack changed some members and this was the main cause, why it took us so long to release the „Anti-Human Nekro Kvlt“.

2.In October you had released your first album, how would you describe the musicla sound that is presented on the recording?
H.P.: Through out the Album, the sound represent the way we wanted to express our music. Raw rhythm section with nervous guitars and agressive/psychotic vocals. We are very satisfied with the production by S.S. from Quercus Park Studios.

3.The band has been around since 2009 but so far this is the first album, can you tell us a little bit more about the first 5 years?
H.P.: Mostly we had problems with the line up, which took a lot of time, but in the meantime the core of the band was making new material (... a lot of alcohol was wasted).

4.Your lyrics cover some satanic and anti christian topics, how would you describe your views on Satanism?
H.P.: As a unity, we had agreed on a consensus, what Human Putrefaction stands for, but every member has his own view on this subject. As long as we have common goals, the Anti-Human Nekro Kvlt will be alive.

5.What are some of the best shows that the band has played so far and also how would you describe your stage performance?
H.P.: Every performance gave us it's own feelings, but so far, one of the most remarkable for us was the show at Trainstation squat in Kranj on April 2013, where J.D. From Somrak, who also recorded the back vocals and vocals for sixth track on the album, again joined us on the stage.

6.Do you have any touring or show plans for the new album?
H.P.: Till now we only had the release ritual, but we have plans for more gigs in future. Regarding touring things are still in mist.

7.The new album was released on Mater Tenebrarum Records, can you tell us a little bit more about this label?
H.P.: The guys from the Slovenian underground label MTR are very dedicated individuals whith a great feel for music and scene and we hope that we started a hellish relationship with them.

8.On a worldwide level how has the feedback been to your music by fans of black metal?
H.P.: Till now we did not get many feedback, also because we dont have the intention to force our music, not that we would not appreciate fans or critics from the globe. But till now the reviews of the album from some web-zines are promising.

9.What is going on with some of the other bands or musical projects these days that some of the band members are a part off?
H.P.: Nothing special which would change the path of Human Putrefaction and its intentions, although some of us have other projects.

10.Where do you see the band heading into musically during the future?
H.P.: Our vision grows, but future is still posessed by misantrophy.

11.What are some of the bands or musical styles that have had an influence on your music and also what are you listening to nowadays?
H.P.: We follow our own principles and feelings, with no special influence from the artists we appreciate.

12.Before we wrap up this interview, do you have any final words or thoughts?
H.P.: Too much questions, Whiskey bottle is dry so we better fuckin' shut up!
A.M.S.G.

Posted by OccultBlackMetal at 1:34 PM