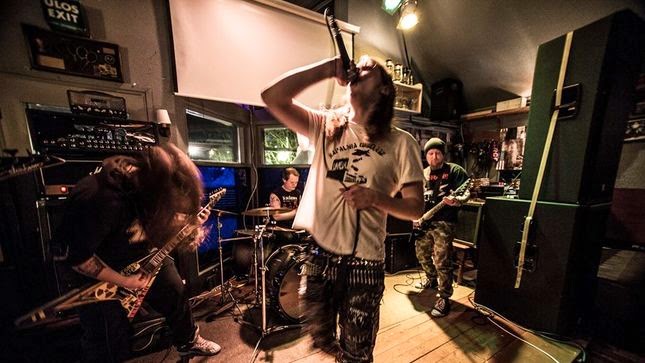 1.For those that have never heard of you before, can you tell us a little bit about the band?
Violent Hammer is primitive death metal from Northern Finland. We were active 05-08, split-up and re-formed the band in '11 with a new vocalist. The original drummer left the band pretty soon after the re-formation and we had another guy filling in for a year or two before we kicked him out. We tried bunch of other guys and it didn't work out so K.S. switched from bass to drums. Pretty soon after that we found a new bass player and a lead guitarist and things have been running smoothly after that. Violent Hammer is Janne guitar / Joonas vomits / Kalle drums / Lasse guitar / Late bass.

2.Recently you have released a new demo, how would you describe the musical sound that is presented on the recording and also how does it differ from the stuff you have released in the past?
The new stuff is more primitive. The older stuff wasn't that technical or anything but we have stripped down all the unnecessary influences and overall regressed in every aspect. We recorded the demo ourselves and having more experience on that departmant has really paid off.

3.This is the first demo to be released in 7 years, can you tell us a little bit more about what has been going on during that time frame?
We split up after the 2nd demo. We had plans about full-lenght and ep etc but those plans never realized. With the original lineup we didn't do any gigs or anything.

4.What are some of the lyrical topics and subjects the band explores with
the newer music?
The lyrics mainly deal with topics such as war, death and agony. We play death metal and lyrics are very death metal.

5.What is the meaning and inspiration behind the name 'Violent Hammer'?
Violent Hammer is a musical entity that will violently hammer your face in.

6.What are some of the best shows that the band has played over the years and also how would you describe your stage performance?
Thus far we've only played 3 gigs (1st with another drummer). The ones we've played with the current lineup have been slightly chaotic on the alcohol department. There's no stage performance per se; only screams, hate, pounding and blood.

7.Do you have any touring or show plans for the future?
None at the moment.

8.On a worldwide level how has the feedback been to your music by fans of black and death metal?
The feedback has been positive. We sold out the 1st pressing of the demo in a month or so and most of the pressing was sold outside Finland. Haven't seen any reviews yet but judging by the amount on people begging for free stuff we're at least somewhat known, ha!

9.Are any of the band members involved with any other bands or musical projects these days?
Kalle plays drums in Ydintuho (raw punk deathstrike from the trenches, ep coming soon), Lasse, Janne & Late have a swe-death metal project, demo coming sooner or later and Joonas "sings" in noise/grind band.

10.When can we expect a full length album and also where do you see the band heading into musically during the future?
The slower parts are slower and fast parts are faster than on the demo so there's a bit of variation of some kind. No drastic style changes or anything, still primitive death metal hammering. We still have to write at least 3-4 tracks before we start recording. After that it's up to Shadow Kingdom.

12.What are some of your non musical interests?
Literature, computer games, satanic power lifting and alcohol.

13.Before we wrap up this interview, do you have any final words or
thoughts?
At the moment we're working on tracks for the upcoming 1st full length on Shadow Kingdom Records and that's about it. Thanks for your interest.

http://shadowkingdomrecords.bandcamp.com/album/more-victims-demo-2014
Posted by OccultBlackMetal at 2:57 PM