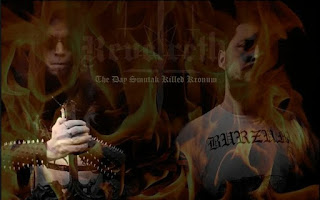 1.Can you give us an update on what is going on with the musical project these days?
1.Aäspraphäärsth: We haven’t got a lot of news, we’re recording our music, we’re working on the lyrics and deriving inspiration from original source. There are several options to record a split with some bands from CIS (Commonwealth of Independent States) and Europe, and then we’ll publish a full-length album.
Darkus: We live in different cities so it makes some troubles and work doesn’t go fast. But there are many ideas which we should realize so just wait for it.

2.In January you had released an ep, how would you describe the musical sound that is presented on the recording?
2.Aäspraphäärsth: In my opinion the musical sound is raw and solid in this ep. There are no ideas to do the genre with trend insertions and upstart sound. Music is an expression of hatred, so it’s a powerful engine and a goal to follow this way.
Darkus: It’s pure evil and hate! This music is a shotgun charged with six killing bullets to the face of the stupid society infected by christianity. In my opinion raw sound combines perfectly with voice of Aäspraphäärsth and makesthe atmosphere of total destruction. So just receive this piece of hatred of us.


3.Your lyrics cover anti christian topics, can you tell us a little bit more about your hatred for this religion?
3. Aäspraphäärsth: The Christian religion is extremely scarce, especially Orthodoxy. Catholicism is faintly perceptible on general ideas. Orthodoxy is completely built on the absurd. Even a pair of these books, that are called Bibles, was created incorrectly and foolishly. They contain a lot of things that contradict themselves. Christians are stubborn and narrow-minded persons, who differ for their scrupulous stupidity and primitivism. If I were not connected with Black Metal, I would still hate Christianity.
Darkus: Christianity is a malignant tumor on the body of humanity. It damages a brain and turns people into sheep. Our land infested with catholicism, Russian orthodoxy, doctrine of the baptists and many other sorts of this shit. All of them build their churches on my land and spread the plague with words: “Do you want to speak about our lord jesuschrist?” They are parasites that devour our roots and suck our life-forces. I can describe a typical pope in our country: it’s a very fat man with a monstrous belly and huge gold cross on it. He has a very expensive car and good house but asks to bring him more money “in the name of god.” And christians obey him absolutely. I have no pity or mercy to them. I see the eyes of the christians – the eyes of brainless slaves and victims. So slaves shall serve. But I walk another way. Jedem das seine!


4.What is the meaning and inspiration behind the name 'Revetreth'?
4. Aäspraphäärsth: The name of our project completely defines us. We didn’t find the title in different books of spells, in the Harry Potter books or in the books of Tolkien… Our name is a set of certain letters, which represents only us, our creativity, our ideas and hatred.

5.Currently there are only 2 members in the band, are you planning on expanding the line up in the future, or do you chose to remain a duo?
5.Aäspraphäärsth: Expend line up is type of extra problems. As a practice shows, work in full line up is slower. There are certainly some ideological guys with whom we’d be happy to have a session in support of a live performance, but no more. Not everyone can work with Darkus. You have to be ideological and totally interested to work with him. I’m glad that we had worked with him and we like what we do.
Darkus: I think it’s very important to find a person with who you can be on the same wave. It’s the most important thing when you create a band. So we did it. Aäspraphäärsth  andme possessed by similar ideas, our black flame of hatred is strong enough to create the music so I don’t see any necessityto expand the line-up.


6.On the ep you had done a cover of Mayhem's "Chainsaw Gutsfuck', what was the decision behind doing your own version of this song?
6. Aäspraphäärsth:I like the sound of earlier Black Metal. Therearemany great bands, who tried and created a good music. We chose the earlier Mayhem because there is a lot of anger and aggression. Brief songs that are filled with hatred are what motivates me.


7.On a worldwide level how has the feedback been to your music by fans of black metal?
7.Aäspraphäärsth:It is too early to talk about the worldwide level… This is not an arms race.I will say one thing: all the resources, that have published us in your resources, gave good estimates. There are some people whose estimate is important for me. I haven’t noticed dissatisfied persons, many people tasted this black cake.
Darkus: In one interview Revetreth were compared with the early works of Bathory… That’s fuckin’ great!!!


8.What is going on with the other 2 musical projects these days that one of the band members is a part of?
8 . Darkus: My other 2 projects are Imšar (black metal) and Archalaxis (thrash metal). Archalaxis played last live show in 2012 and the band is in eternal sleep from those days. As for Imšar I've written a lot of material since debut full-length was realized. Now I'm recording the second full-length and it seems that it will be more pagan in sound but keep the presence of Swamp Spirits.

9.With the project 'Imsfar', the lyrics cover a lot of pagan topics, can you tell us a little bit more about your views on Paganism?
9 . Darkus: Nowadays there are a lot of different “pagan” cults in our region. They used to gather in the nearest forest for making “idols”, drinking alcohol and having sex. I should to say that I hate them not less than christians. Actually I don’t like any form of gathering people ‘cause it reminds me a herd. I walk my path alone in silence face to face with Nature, mighty and powerful, feel its borderless strength and recover my own forces, receive an inspiration – this is my own Heathendom.

10.When can we expect a full length album and also where do you see this band heading into musically during the future?
10. Aäspraphäärsth: Maybe we’ll publish a full-length album the next year. I think so. For the present we’ve got a good way and there are no obstacles. We don’t think to stop, so everything is still ahead, with this right direction.
Darkus: We are working on the material of forthcoming full-length and I can tell exactly – we stay evil, raw and blasphemic.

11.What are some of the bands or musical styles that have had an influence on your music and also what are you listening to nowadays?
11. Aäspraphäärsth: I listen to earlier Black, Death, a bit of old and angry Thrash Metal. I have no time or desire to be up on the deformation of these genres, and the old no one will take.It can be listened to for ages. Old and angry things are very hard to find even in digital formats. I have a very good bands and projects that make music in the right direction.
Darkus: All influences were correctly marked in different reviews in our material – old-school black metal bands from 80’s and early 90's. It was a great epoch of a true and honest music. When I’m listening to something new it’s important for me that the music will be honest and full with some kind of energy. And if the band simply tries to show how many notes they can execute in one second – it’s not for me.

12.How would you describe your views on Satanism?
12.Aäspraphäärsth:I don’t refer myself to Satanism. There are few mentions of this subject in our lyrics. Paganism is closer to me,it has a powerful energy and a lot of logical explanations. Furthermore Paganism denies Christianity, absurd believes and hatred of all vile and false.
Darkus: I’m a Heathen and support Satanism as a reaction against christianity. Christianity strictly divides Good and Evil. But there is no Light without Darkness, there is no Good without Evil. What is Evil at all? Some bad things could turn into good ones, poison could be a medicine in some cases and in other cases medicine could turn into poison. Things have different sides and it could be more than only two. And it’s very important for me to look at things from different points behind all imposed values. This is the real freedom.

13.Before we wrap up this interview, do you have any final words or thoughts?
13. Aäspraphäärsth: I’d like to thank you for your cooperation and wish everyone to stay on the right path, and not to turn,even if there are difficulties. The ideas are above all.
Darkus: Thanks for the interesting questions! Keep your Roots!

Posted by OccultBlackMetal at 8:06 PM