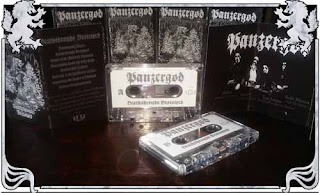 Panzergod  creates  another  black  metal  album  that  continues  the  true  second  wave  tradition  of  the  style  while  also  bringing  in  more  melodies  this  time  around  and  the  whole  album  sticks  to  a  very  heavy  musical  direction,  the  production  sounds  very  raw  yet  heavy  at  the  same  time  while  the  lyrics  cover  Satanism,  Blasphemous  and  Occultism  themes.

https://exilemusick.bandcamp.com/album/panzergod-deathshrouds-bestowed
Posted by OccultBlackMetal at 12:30 AM