For those that have never heard of you before, can you tell us a little bit about the band?
Band was formed In 2012. It was only a project but our passion and will of creation after years of absence made that we formed Serpent Seed. Music we create is result of our musical taste and experience that we collected in former bands we played in , has influence on its today’s form. In 2013 Wojtass jojned the band and soon after that we entered studio to record Debris Of Faith.

In November you had released an album, how would you describe the musical sound that is presented on the recording?
The music that you can hear on Debris Of Faith is defined as a melodic black-death metal. Tracks on the album vary. As I mentioned before they are result of our musical taste so you can here many of black, death, thrash or doom metal motives on the whole album. We don’t want to create something new what will make the revolution in metal world. We didn’t use any electronics upgrades or effects when recording. We wanted that album sound raw and heavy. In my opinion we created crippling wall of sound which will satisfy many old school black -death metal fans.

What are some of the lyrical topics and subjects the band explores with the music?
We stand up on music rather than lyrical content. The country we live is dominated by a Christian church. Clergy have huge political and financial influence but priests enjoy exclusive lives. That's why many lyrics contain anticlerical content because we don’t agree with that politics. Other lyrics are an art only.

What is the meaning and inspiration behind the name 'Serpent Seed'?
We were only project without name for a long time. We wanted the name will reflect band’s spirit and its character. We wish that our music brings forth what is within listeners. That ancient anger that can told “Fuck ! I don’t agree, I won’t be submissive, I withstand!” The power that we have inside which the church and its followers are trying to damp. The name Serpent Seed doesn’t support popular doctrine about Nephilim. We translate this as a devil’s spawn.

What are some of the best shows that the band has played so far and also how would you describe your stage performance?
Up till now we had few gigs with current lineup. We are normally working and band is only our passion . We give all our best on the stage and we are trying to give power that a Serpent Seed’s music brings. My best gig so far was with Valkenrag in the Luka Club, Lodz.

Do you have any touring or show plans for the future?
Temporarily we have vacations but we will start with gigs from September. More details on our fan page.
The album was released on The End Of Time Records, can you tell us a little bit more about the label?
The End of Time Records is small, independent record. Dev is person that stays behind this label. He is an enthusiast and one of many people that stands up on a music not product to sell. This agreement suits us and our cooperation is very good. I recommend to become familiar with other good bands from this label . 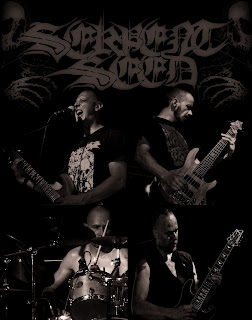 On a worldwide level how has the feedback been to your music by fans of black and death metal?
We are surprised that our music have great reception over the world. Complimentary reviews are still coming what proves that our hard work we put in production didn’t go down the drain and Serpent’s Seed is planted on new black hearts of metalheads all over the world.

Are any of the band members also involved with any other bands or musical projects?
All of us were involved in any metal band or project before . Bands we played were War, Lugburz, Slain, Architect Of Disease and some less important projects.

A band is still in progress. All the time we are working on new material. We wish that new release won’t be copy of something we heard on Debris Of Faith. Hope we will surprise our fans with something new but won’t miss band’s character at the same time.

What are some of the bands or musical styles that have had an influence on your music and also what are you listening to nowadays?
Average age of band’s member is about 40. We grew up in golden ages for metal scene where nobody cared about black, death, thrash or heavy metal segregation. More of metal genre that we have nowadays hasn’t existed yet. Everyone listened to just metal and our appetites and musical horizons were endless. Our music alludes to bands we listened to and what imprinted its own stamp on our souls. We don’t want to create new genre of metal. We are playing what we want and don’t care if we move beyond black-death metal frame.

Does Satanism or Occultism play any role in your music?

Satanism or occultism appears In our lyrics but it’s only form of expression. Belief in Satan imposing necessity of God belief what is dissonant with my point of view. If I only see possibility to strike the hypocritical and greedy clergy I do it with pleasure thanks to our lyrics.


Thanks for interview and that You interested In music we play. Greetings to our fans and bands we shared stages on gigs. 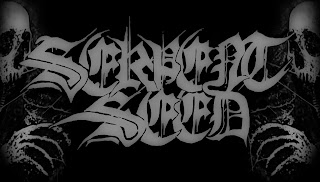 Posted by OccultBlackMetal at 10:33 PM