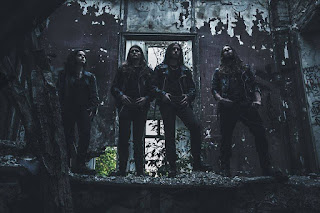 1.For those that have never heard of you before, can you tell us a little bit about the band ?

V : J and I have been playing together for almost 9 years. We had been involved in different death or black metal bands that remained studio projects since we were in high school. After a short break in our musical activities, we decided to reunite and create Acedia Mundi at the end of 2013 and after several demos in our former projects, we didn’t want to get through this step again and we began to put together directly a debut full-length album. Then W (bass) and G (drums) joined us in 2014. Following French bands we like such as Temple of Baal or Glorior Belli, we went to the Hybreed Studios and worked with Andrew Guillotin on the recording, mixing and mastering of our first release “Speculum Humanae Salvationis”.
2.Recently you have released your first album, how would you describe the musical sound that is presented on the recording ?

V : We wanted to propose a music of  the 2010s. We are tired of these bands that sell you a “refreshing” and “uncompromising” extreme metal, while they sound like an uninspired patchwork of all that has been done in the 90s. Like others, we do have influences of course and it appears in our music, but we tried to bring out our own personality through dissonant arpeggios, crawling melodies and sharped and catchy riffs, as well as mixing black, death or thrash metal with some influences from rock. In addition to the fact that we like Andrew’s work for different kinds of bands (black, death or more modern metal), he managed to catch the sound we wanted: heavy, bold and harsh.
3.Your lyrics cover psychoanalysis and the writings of Georges Bataille, Jean Genet and the films of Larry Clark and Harmony Korine, can you tell us a little bit more about these interests?

J. : Frankly speaking, those artists you are referring to are just a few instances of what we were really into when we wrote the lyrics. We are not a so-called “conceptual band” – a notion I don’t really like -  and even if we have our little obsessions which perfuse through the whole album, each song is completely singular. When we say that Bataille or Genet were inspiring for us, it just means that we had their works in our mind when we wrote the lyrics, and that we tried to catch a kind of emotion that we felt while reading their books, and what is true for them is also true for many others.

4.What is the meaning and inspiration behind the name 'Acedia Mundi'?

J. : “Acedia” means “disgust”, or “tiredness”, and “mundi” is the genitive form for “mundus”, the world. So it means “the disgust of the world, the tiredness of the world”. Grammatically, we can as well understand that the world is either the object or the subject of that feeling of disgust. Furthermore, the word “acedia” is used today to refer to a spiritual moment of doubt for a monk. But, between us, we would call the band “Acedia fucking Mundi”, which makes it a bit less old fashioned. Now that you’ve heard about it, it’s up to you to choose what you want to see behind this weird name.
5.What are some of the best shows that the band has played so far and also how would you describe your stage performance ?

W.  The band has never played live. Way before the recording sessions of « Speculum Humanae Salvationis » we had claimed that Acedia Mundi would be primarily a studio project that wouldn’t get on stage until its second album. This decision was made because of the demands of members’ schedules. After a long process, the album is finally released thanks to Throats Productions (Mexico).

Witnessing the concrete rise of our band, we could not resist the urge to take a step further and get the band on stage. This does raise some serious issues for us as we are a three-piece band and we need a drummer. G. is and will remain an honorary member of the band. She composed the drums that were later programmed on studio. Her participation in the album has been decisive. Now, we are looking for a competent and motivated drummer to work with, someone who understands the needs of our music.

Being a studio project Acedia Mundi has never rehearsed together before nor after the recording of « Speculum Humanae Salvationis ». If J. and V. have indeed worked together to compose and record the album, the bass tracks were not done at the Hybreed Studios. I recorded them at Mannaz Records a few months later.

As the songs weren’t composed with the thought of live shows, mastering them will be another challenge we’ll have to face. If we continue as a four-piece we’ll may have to make a few adjustments in terms of lyric placements.
6.Do you have any touring or show plans for the future ?

W.  As a matter of fact, we do. Having played around fifty shows across France and Switzerland, I now know many venues and some promoters who would be interested in having us. Reaching other cities than Paris shouldn’t be too difficult.
7.The new album was released on 'Throats Productions', are you happy with the support that they have given you so far ?

W. We are very happy about the deal we currently have with Throats Productions. We discovered the label when they produced Antilife’s debut album. I got curious about the reasons that lead an underground band from the north of France to sign with a label from the other side of the Atlantic Ocean. That is why I thought I’d give it a try and sent an email to Edgar from Throats P.

After a few emails I understood I had found what I wanted for the band : a deal based on trust with a down-to-earth label manager that would leave us a good amount of freedom and listen to our questions. For now, the CDs are still at the factory and we look forward to see the result of this collaboration.
8.On a worldwide level how has the feedback been to your music by fans of black metal ?

W. I guess the fact that our album is on a shitload of torrent websites means people are digging our work. Aside from that we’re pretty thrilled about it all. I’m proud of our work. I know its strengths and weaknesses. Of course, it ain’t a perfect album, but it is a solid foundation and the number of individuals interested in our music grows by the day.

Our aim is to shape an extreme form of music for this 2010 ending decade, instead of being another tedious counterfeit of the musical masterpieces from the past century. We waited a long time for this record to rise from the dark. Knowing that people around the world understand and feel the purpose of your work feels good. And if it doesn’t change the profound feeling we have about this record, it may shape the borders of that feeling.

Recently someone asked us what vaginal speculums had to do with the concept of the album. It actually makes sense to ask that question. Seeing the titled of the album from a latinist’s point of view I hadn’t even thought about it. Speculum is a latin substantive that means mirror. Thus, Speculum Humanae Salvationis translates as The Mirror of Mankind’s Salvation. As this linguistic similitude between the two speculums matches the aesthetics of our album, the reflection of the mirror is now a bit more repugnant.

9. Is any of the band members currently involved with any other bands or musical projects these days ?

W. I have the reputation of being an underground whore. I’d say I’m far from being the dirtiest of them all but it is true that the parisian underground scene is incestuous. You get to see the same faces. Lately I’ve had the pleasure to do some gigs with my friends of Ave Tenebrae (Melodic Black Death Metal).

Aside from Acedia Mundi I am seriously involved in Atavisma (Doom Death, Paris) as bass player. I’m in charge of promotion and booking, doing similar tasks as the ones I do for Acedia Mundi. The band will soon release its first EP entitled « On The Ruins Of A Fallen Empire » through the swedish label Blood Harvest. It’ll be a 7 inch vinyl. I also get some proposals from time to time and do some replacement if it doesn’t get in the way of my two main bands.
10.Where do you see the band heading into musically during the future?

V : At this time, what I can say to you is that we have already started composing some new materials for the next release. We don't know how it will sound, but it will be a little bit different, for sure. We want to keep that dissonant and punchy vibe, while increasing the punk/crust side of our music. The lyrics will be shorter too. This album will be more fitted for lives, more than “Speculum” which is pretty “opaque” and has a very complex atmosphere, really hard to faithfully transpose on stage. But for this first album, we accepted that challenge and I think the result will be interesting, and even more when we'll be ready to add some new stuffs in our setlist!

J. : We already have two new songs, and a bunch of new riffs. Those songs are a bit shorter, probably catchier than what we did before. We also want to break free from the traditional models of the genre, especially in terms of imagery. I want something more modern, less cliché, more provocative. Blood, nails, crosses, religious bullshit, all that doesn’t make anybody uncomfortable anymore. I want to piss the tamed metalheads off with what they are still afraid of. The extreme metal scene is getting boring because it is so codified. Metalheads want to stay in their comfort zone, we want to break it. So, it’s of course far too early to be very specific, but I would say that the main idea is to bring punk back into extreme metal.
11.What are some of the bands or musical styles that have had an influence on your music and also what are you listening to nowadays?

J. : Madonna, of course, and the last Bethlehem.
12.Before we wrap up this interview, do you have any final words or thoughts?