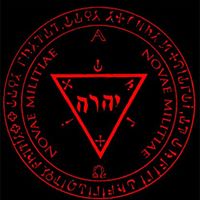 1. Can you give us an update on what has been going on with the band since the recording and release of the new album?

During this period, we began to think about the next works we could achieve. We wondered about the concepts we would like to work on, the messages we would like to convey and how best to achieve them. The feedbacks about "Gash'khalah" exceeded our expectations, this album has aroused interest in black metal underground and a craze among a devoted public. This reinforces our determination and gives us the urge to go much further.

The sound is following on from our first demo album “Affliction of the Divine” to "Gash'khalah"the equipment used and the recording process are almost identical. However, we have made improvements: While keeping the same roots, "Gash'khalah" marks an evolution, it enjoys a more powerful and successful sound. We wanted to get closer to the sound of black metal productions of the 90's, the time of its greatest glories, while being able to compete, even surpass, the power of the current productions.

3. This is your first album since 2011, can you tell us a little bit more about what has been going on during that time span?

In "Gash'khalah" we did not want to leave anything to chance. It took a lot of work and long periods of reflection. We wanted to release the most accomplished album possible. Sometimes, we put compositions aside for several years to come back with a new and more thoughtful look. We think it is better to release a very elaborate album rather than several unsuccessful ones that would leave us with the feeling of having released unfinished works. We wanted to mark the spirits with a more violent, darker black metal than the majority of the current groups, more involved in the way of the Left Hand Path. We want to distinguish ourselves from the current black metal bands, which tend to move towards an "opening" towards modern and original musical styles. Nowadays, more and more bands offer the listeners a simple distraction or pleasant sensations. It is not black metal as we perceive it. It must be absolutely dark, mighty, glorious, religious, rooted in death, and must encourage the listener in his spiritual enlightenment.

4. Your lyrical content is very heavily rooted in Occultism and the Left Hand Path, can you tell us a little bit more about you dedication to the dark arts?

I would say above all, that since very young, it was natural for us to orient ourselves towards the Left Hand Path. Whatever they say, I think it's natural for some people and we are definitely among them. In order to progress in our religious quest and in the treacherous path of knowledge, we studied a lot. First of all the religions: Christianity / Judaism in the broad sense, old Testament (Ezekiel, Joel, Zechariah, Daniel…), new Testament (Book of Revelation), texts, apocryphal gospels and apocalypses (Apocalypse of Ezra, First Apocalypse of James, the Book of Enoch…).

Other ancient religions inspire us like Zoroastrianism (1st millennium bc) with the character of Angra Mainyu, who incarnates the absolute evil, to whom we pledge allegiance. To define the absolute evil, I think of these words of the occultist French Eliphas Levi « The absolute affirmation of evil is the negation of God, since God is the supreme and absolute reason of good. Evil in the philosophical order is the negation of reason. In the social order, it is the negation of duty. In the physical order, it is the resistance to the inviolable laws of nature. » To quote this great master allows me to address other aspects of the Left Hand Path omnipresent in "Gash'khalah" and for which we have a great interest: That of occultism, Mysticism, Kabbalah and the Qliphoth. "Gash'khalah", the title of our album, means, according to the traditional death tree of the Golden Dawn referring to Aleister Crowley's 777, "The

Destroyer". To improve knowledge in all these areas is essential to understanding what theological Satanism can stem from.

5. What is the meaning and inspiration behind the name 'Novae Militiae'?

The name is inspired by the title of a book by Bernard de Clairvaux (French monk of the 12th century, who seeks the hardest mortification, in order to progress in the spiritual realm). De Laude Novae Militiae / Praise of the new militia (Written with the aim to legitimizing the crusades). Using a band name in the sacred language of the occident was important to me. "Novae" means the renewal, the starting point and "Militiae" means fighting with the aim of extermination. Otherwise, in Novae Militiae, the use of Christian references like Bernard de Clairvaux, the Stabat Mater (some texts and some images in our artwork are inspired from it) and the YHWH in the logo allows me to make a parallel between God and Satan. For Satan has His dwelling in the religions, in the synagogue of Satan as stated in the Apocalypse of St. John 2:9 / 3:9, and He presents Himself as an angel of light as indicated in the 2nd epistle of St. Paul to the Corinthian apostles 11:14. The stained glass window of the Saint Pierre church in Montfort-L'amaury (Yvelines / France) can testify to that. An anonymous glassmaker paints here the scene the temptation of Christ in the desert. Satan manifests Himself under the guise of a saint, dressed as a monk. Only one detail betrays Him, His feet are forked and red.

6. Nobody know the musicain behind the albums, do you feel having a mysterious identity makes the music have more of a back to roots approach to black metal?

I think a lot of bands had a mysterious aura in the 90's but it was not intentional for most of them. This is mainly due to communication that was far less developed than nowadays; information about bands was hardly accessible. Today, everything is different. The mystery has gradually disappeared with the arrival of the internet. Bands and labels are today in mass communication, to the point that, overwhelmed by the flow of information, we are no longer able to obtain truly interesting information. As far as we are concerned, we prefer to remain anonymous, we do not see the interest of disclosing the identity of our members because we think that the most important for a black metal band is its Art and the message that he unveils.

7. How would you compare working with 'Goathorned Productions', to your previous label 'Nihilward Productions'?

It is difficult for me to compare them because I have a great respect for both labels. I prefer to talk about their similarities. First, the desire to remain underground and to produce groups with strong ideologies. The releases of the two labels are produced on thorough supports and very limited in quantity. Almost all of their productions are now sold-out. I think that many labels, including the most important ones, will soon be inspired by these methods. Nowadays, labels in mass production find themselves in difficulty because sales are underperforming. The listeners wish to invest in polished and limited items that will gain value once sold-out. The great return of the vinyl format is a good example.

8. On a worldwide level how has the feedback been to your music by fans of black metal?

We had good feedbacks from "Gash'khalah" from around the world. As I said earlier, this album has aroused real craze among an initiated and devoted public. I think that today there is an expectation of black metal bands conveying strong ideologies to reappear, which partly explains the interest of groups like ours today.

9 .What do you feel makes you different from most bands in the modern occult black metal style?

I think that what differentiates us from other bands is the constant violence that emerges from Novae Militiae. From the first few seconds of listening, the listener understands that he is dealing with a band playing black metal that is more extreme and devoted than the majority of previous and present bands.

He won’t get any respite. Each title is worked in such a way that there is no positive moment. Each passage leads to an even darker passage. Today, I think that many bands are sincere in their art but few groups have an aura as black, mystical and striking as Novae Militiae. It is a total allegiance to evil.

10. Wheathere do you see the band heading into musically during the future?

I want Novae Militiae to go further in transcendence. I want the listener to be more troubled. We want to reveal and exploit his deep feelings buried deep within his soul to take him into black and total enlightenment.

11. What are some of the bands or musical styles that have had an influence on your music and also what are yu listening to nowadays?

Our first influence is undoubtedly the Scandinavian black metal scene of the 90s, years during which we discovered black metal. Memories with time fade but some will never disappear, but I remember it was a new style of music that looked like nothing we had ever known before. The bands of black metal conveyed a very strong image and black metal, as we said before, released a mysterious aura and violence without limit... Being very young at that time, all this has impressed me tremendously. I try to incorporate these elements in Novae Militiae which are for me indispensable to the Black Metal Art.

Then I would say that we define ourselves as an orthodox black metal band. Therefore, some bands inspire us. I think of the album "Si Monvmentvm Reqvires, Circvmspice" of Deathspell Omega and the band Ofermod from which we enjoy all the albums.

Otherwise, I listen a lot to Acherontas's latest album ''Amarta अमर्त (Formulas of Reptilian Unification Part II)'', a band that I appreciate and have been listening for a long time (Stutthof period). I am very attentive to its evolution. My last discovery is LvxCælis with his latest album ''The Watchers'', this band really impressed me.

All of these bands influence us more or less directly. When we compose, we never tell ourselves that we want one of our titles to resemble that of such and such band but the spirit of these bands is in Novae Militiae without a doubt.

12 .Before we wrap up this interview, do you have any final words or thoughts?

Posted by OccultBlackMetal at 9:14 AM