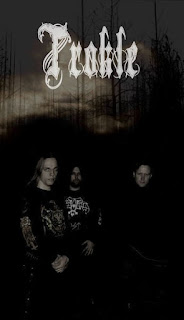 1. Can you tell us a little bit about the band for those that have never heard of you before?
1.Trokle started in 2007 as a solo project. I (Alf Petter) recorded guitar riffs and came up with a lot of ideas, and that was the beginning of the demo “Trolltjern”. I realized after some time that I needed some help with vocals and drums. Mr. Dementia joined on vocals, and Sigurd Aure on drums. Sigurd left the band in 2009.

2. How would you describe your musical sound?
2.It’s difficult to place us in a genre, because I find inspiration from both death and black metal. I would say a combination of these genres with a twist of rock n roll!

3. What is the meaning behind the band's name?
3.Trokle is an old Norwegian word that means to put different parts into a complete unit. That’s what music is all about, isn’t it?


4. Have you thought about adding any other members so you could do live shows, or do you want to remain a studio band?
4.Now we want to get enough members to a full band, so that we can be able to do live shows. We already have potential members. I think this will take us to a whole new level, and a positive experience.

5. Have you received any label interest yet, and if you are looking for a record label what kind do you think would suit the band ?
5.I think a record company who is serious and willing to give an untraditional black/death metal band a chance is the thing for us!

6. How would you describe your musical progress over the years and what direction do you see the band heading into on future releases?
6.As I said in the beginning of this interview, it all started as a solo project. I believe that Trokle can be an exciting live and studio band if we get the chance. I think we can add something different into the market. We are working hard, and I think that one day our chance will come! We have more than enough material to publish a full-length if someone is interested.

7. How would you describe the lyrical content of the music?
7.Our lyrics are about war, history, fantasy, horror and so on. We write about whatever comes to mind!

8. How has your music been received so far by black metal fans worldwide?
8.We have received many positive responses from people. They often say that they think we have found our special sound, and they like it. We want to thank everyone who supports us, it means a lot!

9. What are some bands or musical styles that have influenced your music and what are you listening to nowadays?
9.I find inspiration in both black and death metal. I also is a huge fan of classic heavy metal.
I listen to for example Immortal, Gehenna, Limbonic Art, Obtained enslavement, Dismal euphony, Emperor and so on. My list is long, but these are among my favorites.

10. Does Satanism or Occultism play any role in the music?
10.No these things don’t mean anything for us. It’s more than enough darkness in the real world.

11. Outside of music what are some of your interests?
11.Besides music, I like hiking and fishing. We live in a beautiful country with an impressive nature.


12. Any final words or thoughts?
12.I want to thank you for showing interest in us, and giving us the chance to show more people who we are. Visit our profile on myspace to check out our material! Rock on!

https://www.reverbnation.com/trokle
Posted by OccultBlackMetal at 3:39 PM