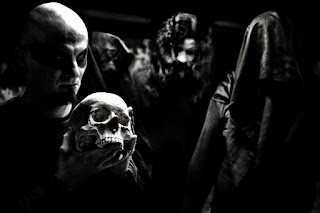 We are after release of our debut material Trauermarsche (and a tango upon the world's grave) and keep rehearsing before the first show scheduled for this year.

2.In December you had released your first album, how woudl you describe the musical sound that is presented on the recording?

It's fucking noise from hell

3.On the album there was no regular guitar and the saxophone was also used as a lead instrument, do you feel this gives you music more of an original style?

It's not really original these days, in Poland there are at least two bands using this instrument on regular basis. It was not our intention to make the sax as an any extraordinary thing, it came pretty natural and honestly saying it is an outcome of meeting the right people in the right place. When it comes to lack of guitar - we wanted to get the sound as filthy and gloomy as possible. We came to the conclusion that having a maximum distorted bax and saxophine is good enought to reach this goal

Fall of the world, human relentless about beliefs and related to this infatuation and fanaticism.

5.What is the meaning and inspiration behind the name 'Sigihil?

It's the sigil of Satan of course, it does not need any explanation.

There were not much of them so hard to answer this question. The stage performance is a ritual of noise, worth to check if you want to be taken to other dimension.

Yes we have the plans, however its hard to find a companionship for this kind of music here in Poland. So we focused  on booking rather one-time shows and festivals. If anyone would like to book us, we are open for propositions.

8.On a worldwide level how has the feedback been to your music by fans of black metal, drone, sludge and doom?

Pretty good, to be honest it's better than I expected while I've been composing the riffs. It's not the music you listen while doing the dishes, you need to focus on it and it is not what people prefer today.Anyway, the reviews are pretty good so I'm happy for that.

9.What is going on with some of the other bands or musical projects these days that some of the band members are a part off?

I'm involved in Outre and we are now finishing the recordings of vocals. The "Ghost Chants" is set for release early spring, I believe it's going to be a first half of march. Grekh is also finishing the other material with his firends, they are working on it with Nihil from Furia/Massemord/Morowe etc. Kvass is promoting his two albums - Moanaa and Got no Soul.

I don't know. You can ask me this question after releasing the second album. It's unknown what will happen in our minds in a year or two.

11.What are some of the bands or musical styles that have had an influence on your
music and also what are you listening to nowadays?

People used to say that everything needs an inspiration and they usually refer to other bands, artists, etc. In some review I've read that we are surely inspired by the band The Body. This was the first time I've seen anyhing something about that band, not even saying about listening them. For the inspiration is my guitar and the rig I have. I like to close in the rehearsal roon and just play. Then the best things comes out. Of course I'm aware that I listen lot of things and some of them are getting deeper in my head what results in riffs that may seem to be more similar to some of the others. But I don't really care about that. I just play what I like.


12.How would you describe your views on occultism?

The most important thing for me is the freedom of speech and beliefs, but only when it not harms anybody else. Basically I've nothing against Christian, Muslims and any other religion, but I'm staying in oppose to those representants of these religions who are trying to impose peopple around them their point of view. I'm fighting with that and I have no remorse to tell uch asshole that I don't care what are you doing with your life, just let the others do what they want. As you see it has nothing to do with occultism, but with clearly what people used to call as satanism. In Judeo-Christian culture such attitude is associated with Satan, the left hand path etc and is seen strictly negatively. I don't care about that and follow my own way.

I love to read. Also I have wife and son, which I'm trying to sacrifice as much time as I can. Having a regular job, a family and two bands there is not much time for anything else.

Follow your own way and let the others do the same, the world will thank you for that and you will not have to mourn on its grave.

https://www.facebook.com/Sigihl/
Posted by OccultBlackMetal at 3:57 PM