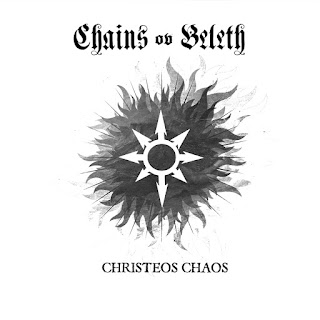 1.Can you give us an update on what is going on with the musical project these days?
Ave! Right now we're still working on promoting “Christeos Chaos” as much as possible (both the label and I). The German label Dark Ritual will soon release a demo compilation with a couple of extra, unreleased tracks, called “Black Illumination”, and I am always working on new songs for future releases.

2.In May you had released a new album, how would you describe the musical sound that is presented on the recording and also how does it differ from the stuff you have released in the past?
Yes, a few months back we released my second full album called “Christeos Chaos”, which presents an evolution of the music recorded in my first album “Katabasis”. You can find the same elements that were present there, just more refined and with more variations. There is a bigger variety of tempos, the structure of the songs is generally less simplistic (even though there are a couple of songs that do follow a more traditional structure), and overall I would say there has been an improvement both in the execution and quality of the material. The sound is better too, and I experimented with some clean voices in a couple of songs, which is probably the biggest change. There is also the fact that I included a song in Spanish, something I've never done before.

3.The musical project has been around since 2005 but so far has only released 2 demo's and 2 full length's, can you tell us a little bit more about the gaps in between releases?
The main reason why there has been so big gaps between releases is that I play in several other bands (or used to, less so nowadays), and I like to focus on one thing at a time, so if I am working on a specific band's album, I can't be really working very seriously on other releases. I think that is probably the best for the band though, because otherwise the music could become stale; you have bands that release an album every year and there is little change between them, it's basically the same album, stretched through several years... It's great to have a formula and follow it constantly, but by recording stuff for several different bands I space their releases, and in my opinion that keeps the music in all of them fresher, more authentic. I of course don't mean change for the sake of change, I love bands which are true to their sound, like Iron Maiden for example, but I think an evolution is necessary, if not unavoidable. This is something I didn't understand nor accept years ago, but with time and age I have come to appreciate; take for example Satyricon, some would say that they have betrayed their roots and that they are not even a black metal band anymore, that they have sold out, but in truth they have sticked to their style, simply altering and evolving the formula. Imagine if they had never evolved from Dark Medieval Times (amazing album, by the way), we would have never gotten Nemesis Divina or Rebel Extravaganza. I think it's important to stay true to one's essence and message, and evolve as necessary, without artificial boundaries created by what the general public expects from a specific musical genre.

4.Your lyrics go in depth into Occultism and Black Magick, what are some of the aspects that you explored lyrically on the new album that you where not able to do with previous releases?
I would say that the core concept behind CoB is the Left Hand Path, with its wide arrange of subjects. Most of the songs in “Christeos Chaos” are chants in praise of darkness and the forces that dwell within it, with a few exceptions. Lyrically speaking, this is quite an eclectic album, since I also added some older, unused lyrics and mixed them with newer concepts and chants. In a way, this is a continuation of the previous album since I touch many subjects that I treated there, just from a new perspective. Some lyrics are based on ancient traditions and prayers, other like the song “Christeos Chaos” are based on modern grimoires, in this case Nicholai Saunder’s Arbor de Magistro. So with this album I explored themes both old and new for CoB.

5.I know that the band name is related to the Goetic demon Beleth, what was it that inspired you to name your project with this deity being a part of it?
I wouldn't call Beleth a deity, but back when I started composing music for what would become Chains ov Beleth I was working very closely with him, and I felt in a way chained to him… So it was a natural option, I suppose. Sometimes we become obssessed with the entities we work with for a longer period of time.

6.With this musical project you record everything by yourself, are you open to working with other musicians or do you prefer to work solo on this project?
Not really, I honestly like having full control in CoB. I have another band, Eald, which also started as a solo project but right now has another two members, and that is enough for me. CoB is a very personal project, and I don't want to spoil that. There are of course advantages to playing with other people, mostly the opportunity of playing live, but since that is not one of my goals, it doesn't bother me at all.

7.For awhile you where living in Norway, what was the decision to move back to Spain?
Norway is a wonderful country to live at or simply for visiting, and I still have great friends there, but for personal reasons I decided that it was time to change. I actually didn't go back to Spain, I went to Serbia. Since then I've been back at Spain, Germany and again Serbia.

8.You also run 'Fall Of Man Press', what are some of the authors that you have worked with and what can we expect in the future?
I guess the most known author for black metal fans would be Shamataae from Arckanum, who used to write under the name of Vexior. We have recently released the first book of the man behind the black metal band Sanguinary Misanthropia, entitled Diabolic Gnosticism, and we will soon release a new book focused on the ancient art of Brazilian necromancy and ancestor worship called Quimbanda which has the title of The Black Book of Quimbanda. Those are just some of the books we have released that would probably appeal to the sensibility of a black metal fan, but we have released a few more. Anybody interested can check www.fallofman.eu to learn more about it.

9.On a worldwide level how has the feedback been to your newer music by fans of black metal?
I personally haven't gotten any feedback from fans, but the label tells me that people buying my CD seem to like it, which is great. There have been a few reviews here and there, but we are still promoting the album so I believe not that many have had the chance to listen to my music yet.

10.What is going on with some of the other bands or musical projects these days that you are a part of?
The only bands I am really active with right now are Chains ov Beleth and Eald; even though I am still in theory a member of Alverg (we have just had our first album re-released on Vinyl, by the way), that band is a bit frozen for now, since it's difficult for us to rehearse together, and Lóge has shifted his focus from music to other activities as of late. With Eald we have just welcomed a new band member who will be dealing with the vocals, and we are now recording a new demo, but we will talk about it in detail when the time comes.

11.Where do you see yourself heading towards as a musician in the future?
It is hard to tell, to be honest; I don't think I will ever stop playing black metal, but I do see myself experimenting more and mixing genres; I believe that is the only way for a band to progress and evolve and become something else, something more personal.

12.What are some of the bands or musical styles that have had an influence on your newer music and also what are you listening to nowadays?
The bands that influence me the most when I think of composing for CoB are several; when it comes to black metal I have to mention Deathspell Omega and Funeral Mist, but also Satyricon's Rebel Extravaganza and even Ved Buens Ende; out of black metal I would say Virus, The Cure, Sisters of Mercy, King Dude... Nowadays I listen basically to the same stuff I always did; classical black metal bands, with some modern ones here and there, like Ascension or the amazing Kozeljnik, lots of classic gothic rock and post-punk, a bit of electronic music, and even some blues here and there.


Thank you for giving me the chance to talk about my art. And to any true follower of the Left Hand Path: Keep the Black Flame alive! 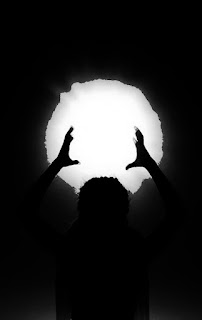 Posted by OccultBlackMetal at 1:32 PM