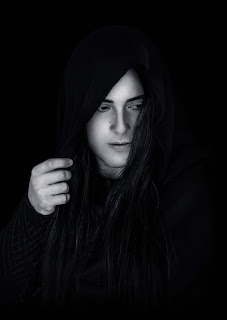 1. For those that have never heard of you before, can you tell us a little bit about the musical project?
Hello! 'Nuitville' is my musical one-man project. I guess, it can be liked by metal fans looking for a mystic, dark but not aggressive music.

2. Recently you have released an ep, can you tell us a little bit more about the musical style you went for on the recording?
Well, my chosen musical style becomes clear when you see the track list of this EP, I am talking about 'Amesoeurs' cover song. So for today 'Nuitville' is a blackgaze project. Definitely.

3. You started working on the music as far back as 2012 but waited until 2019 to release any music, can you tell us a little bit more about the earlier years?
Yes, it is young metal project, however it’s officially. De facto I have started making some atmospheric and dark music sketches already in my adolescence. Then I was 12-13 year-old schoolboy, who was inspired by just appeared in his life Black Metal. Later in 2012-2013 when the sketches became longer and better I took name 'Nuitville' and decided that “time has come” to make something more serious. But anyway I still didn’t have enough experience and opportunities to breathe life in it. Final steps of this album creation began in 2015, but I used a lot of riffs from the past years. So for me 'Nuitville' isn’t so young like for others.

4. What are some of the lyrical topics and subjects you have explored so far with the music?
I was always inspired by the Night, sometimes I even think I feel it in some special way, so the main goal of 'Nuitville' is trying to share these feelings. I used lyrics like imaginative element which works in pair with my music. So what about the subject, it is a hidden mystic side of the Night.

5. What is the meaning and inspiration behind the name 'Nuitville'?
It’s some place from which Night comes to us…

6. Can you tell us a little bit more about the artwork that is presented on the ep cover?
This artwork shows you that moment of my life which predetermined 'Nuitville' birth in the future. So it’s a little bit conceptual.

7. With this project you record everything by yourself, are you open to working with other musicians or do you prefer to remain solo?
Definitely yes. This EP was an experience for me to understand how difficult it is to do all by yourself, especially when we talk about not simple, really multi-track and qualitative music. I’m planning to use services at least of session drummer and bass player. Probably this time I will use services of studio sound engineers for mixing and mastering. Other things I will still do by myself.

8. On a worldwide level how has the reaction been to your music by fans of blackgaze and post black metal?
I guess it hasn’t passed enough time for any final conclusions, but for today, definitely, the reaction is positive. Moreover quite many people ask me about full length album. It really inspires, especially at the beginning of my musical way.

9. When can we expect a full length and also where do you see yourself heading into as a musician during the future?
I really want to believe that already in 1-2 years we will be discussing a new album here. It’s quite hard to predict such things. But anyway, I believe, it is just a matter of time.

10. What are some of the bands or musical styles that have had an influence on your music and also what are you listening to nowadays?
First of all it is a lot of black metal bands, mainly Norwegian, French and Ukrainian, of course. Some classical doom bands, I think even some old hard rock bands. Undoubtedly I must to mention 'Amesoeurs', the really great project. For quite long time 'Recueillement' was for me like a tunnel to another special world. Today I feel very happy to have the official cover song on my debut EP. It was really important for me, so big thanks to Neige and Emi for the given me opportunity to do it.

11. What are some of your non musical interests?
I can’t say that I listen to some modern music a lot during the last time. So currently it is mainly old classical goth rock bands, like “The Cure”, “Bauhaus”, “The Sisters of Mercy”. Besides, some atmospheric rock bands from the 80s and 90s, such ones like 'Fields Of The Nephilim' or 'Type O Negative'.

12. Before we wrap up this interview, do you have any final words or thoughts?
Look into the Night. You can find there your own way to the stars!

Posted by OccultBlackMetal at 9:23 PM