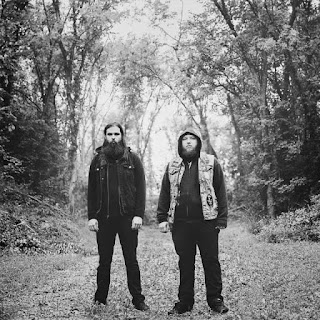 1.Can you give us an update on what has been going on with the band since the recording of the new ep?
Jonny: We’re working on recording the rest of the material for the full release. The two songs are just a demo of what’s coming.

2.You have a new ep coming out, musically how does it differ from the stuff you have released in the past?

Jonny: this is a more stripped down straight forward approach. Nothing complicated, no more doom/sludge/genre blending/whatever else we tried before. Just black metal.

3.This is also your first release in 4 years, can you tell us a little bit more about what has been going on during that time frame?

Jonny: Major life events and focusing on our other projects.
Plaguewielder and Coldfells have both released material in that time.

4.On the new ep, you cover your Midwest origins, depression and psychedelic experiences, can you tell us a little bit more about the songwriting that is presented on the new recording?

Jonny: I can’t speak for the lyrics, but as far as the music goes the Midwest is where we came from in every sense. The area has fallen apart, it’s bleak, it’s underwhelming, it’s sad. It’s got all the makings to influence black metal. Bryce and I both have been surrounded by and influenced by depression in many ways from personally to family members, but also in our physical surroundings. Economic collapse, addiction, deaths, unemployment, etc...
As for psychedelic experiences, a lot of our bonding came from smoking DMT, dropping acid and eating mushrooms. You really get to know someone laying on the floor in filth for an entire night tripping balls and having total breakdowns. That’ll grow a bond like nothing else. Some of those experiences were very early on in this band, and still influence us to this day.


5.On the new ep you also work as a duo, do you feel the music has gotten a lot more personal with only 2 members ?

Jonny: Regardless of the lineup, Horse Drawn has always at its core been a duo. So this isn’t really new, this is just the first time we’re acknowledging it.

6.Can you tell us a little bit more about the artwork that is presented on the new ep cover?

Jonny: there’s not much to tell honestly. There is a lake not far from my home in NJ at a park called Ramapo Reservation. My wife and I were out for a walk. Almost a year later, it’s a little scary how unintentionally appropriate the photo became.

7.Is the new ep also going to be self released as the previous releases where?

Jonny: we haven’t made any attempts to get it released, so probably, but it’s not out of the question that we will contact someone to try and release it. Sometimes DIY is just easier. We’ve both worked with various labels before and less hands in the pot means we can do things at our own pace.

8.On a worldwide level how have your fans reacted to the newer music that have heard it so far?

Jonny: the reaction to this recording has been more positive than anything else we’ve done, so I think it’s going over well. People always have varying opinions though, so it’s easy to get lost in it. We didn’t make the changes to appeal to anyone specifically, it’s just where we are right now.

9.What can we expect from the band musically during the future?

Jonny: it’s hard to say for sure, but what you can expect is more focused material.

10.Are there any musical influences that you bring onto the new recording that you where not able to do on past releases?

Jonny: We had a drummer previously who wasn’t a big metal guy. We still are very fond of him, but it made us write a certain way. That’s why I really wanted to reuse some of the old material (early graves was previously recorded on No Light, and we’re redoing another from that era) to show that HD has always been a black metal band at its core. The approach was molded to what it needed to be.

Jonny: just to say thank you for taking time to do this, and to thank anyone who has checked out our music.

Posted by OccultBlackMetal at 11:09 AM