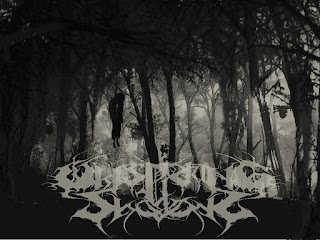 1.Can you give us an update on what is going on with the musical project these days?

Musical project work is slow and steady, I am trying to work on creating a different style of music to my current. More relaxed and clean. The Whispering Shadows stuff is still a priority but I mainly use this a way to let out the anger and pain. Where as the other music as a subtle beauty to it. I guess.  I'm a huge fan of different styles of music so I want to incorporate these in anyway I can. It's all about trial and error.

2.Your last album was released in 2018, musically how does it differ from the stuff you have released in the past?

I think I got better at expressing myself. The early stuff was very atmospherically rooted in black and doom where as the newest stuff has a post rock element to it. Plus I can't growl for shit anymore so I am trying to work out a better way of incorporating vocals.

3.With every album you go into a different musical direction, do you feel a musician needs to show progress with each recording instead of keeping the same style which can also get very stagnant at times/

I actually hate my early work and will happily give it away free to anyone who asks but oddly this is where my main fan base has come from. I think if you keep your music the same the people with wither away. It's about growing as a person aswell as growing as an artist. Life changes every day...so why should music stay the same?

4.What are some of the lyrical topics and subjects you have explored over the years with your music and also how would you describe your progress as a songwriter?

I tend to change my writing style with each release. Each song is personal in its own write and takes a page out of the diary of Me I would say however I sometimes have help with writing from a good friend who's writing far surpasses my own. Her name is Kris and she has helped with a few tracks...a few that I've not released but she wrote the intro lyrics to "Eden" and all of "miles of Ashe and no shade" I won't go into depth about what each song relates to.. however the entire album "unveil the dream catcher" revolves around my grandma who died not so long ago and it's about her battles with dementia.

5.What is the meaning and inspiration behind the name 'Whispering Shadows'?

It means "people who talk behind your back"

6.Can you tell us a little bit about the artwork that was presented on the 2018 album?

This was just a photo I took whilst in Kyiv , Ukraine. It's simple and I liked it.
The album before was drawn by Ksenia Ostapenko who is the wife of my good friend Yegor who is in the band "Narrow House" check those guys out!

7.In 2013 and 2014 you released a good amount of music but since then have only released 2 full lengths, do you feel your music has gotten powerful since you have cut back on putting out releases?

I've never stopped making music. I actually try to make music each time I have some time but because my music took a drastic turn into a different direction I worried I would alienate the fan base I had and it actually took "Yegor" the dude I mentioned previously to say "publish your stuff man" so I did. There's actually alot more on my computer that has not been made public. Powerful? I dunno if powerful if the right word..it's just taken on a life of its own and I believe If I didn't rely on stupid programmed drums it could turn out to be something really special.

8.With this musical project you record everything by yourself, are you open to working with other musicians or do you prefer to work solo?

Again I'll mention "Yegor" here...he is the only person I've really done anything with as I helped work out a solo for an album or ep he is yet to release. I did do some stuff many moons ago with a guy called "Ilya" and the music he was made was so impressive and beautiful but I didn't have any patience back then and I was unable to meld both mine and his style. I am open to working with others but I am abit of an arsehole and if it's not how I see it I somewhat refuse it. I am working on this though haha

9.On a worldwide level how has the reaction been to your music by fans of black and doom metal?

Minimal I would say.

10.Where do you see yourself heading into as a musician during the future?

More post rock, post black territory. Maybe acoustic aswell. My dream however is to make a musical piece that resembles that of the works of "angelic process" as that got me defines how music should make you feel. I want someone to feel what I make the way I feel when listening to that music.

At the moment I am listening to the same stuff as before..but I would say my main pleasure is "Sleep Token" or "Flora Cash"

Yeah, thank for your time in reviewing my stuff and giving me this opportunity. I am still making music so check it out if you can. Also check out "Narrow House" for some cool ass music and "Abrisad Photography" for some cool band photos taken by my freind. If you wanna know the man behind the music check out "Mr Vice" on YouTube and also o have a podcast called "Withered Hands Podcast"

Shameless promotion I know but why not eh?
Take care and keep safe.

Posted by OccultBlackMetal at 12:20 PM