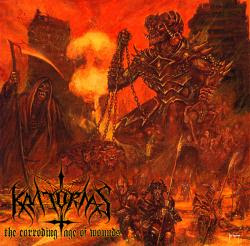 Kratornas is a 1 man black metal band hailing from the Philippines which I was describe as extreme fast war/black/grind/thrash and this is a review of their 2009 album "The Corroding Age Of Wounds".

Drums on this recording are really fast with a lot of blast beats that make Immortal sound like a doom metal band in comparison and they also slow down at times when the music gets slower, to give the music an even edge.

Bass guitars on this recording have a really dark tone that plays the role of a rythym bass., while the guitar rhythms take the heaviest elements of black, death and thrash with some really fast riffs that are very heavy and brutal, as for the guitar leads they are very noisy and chaotic.

Vocals are very high pitched black metal screams that sound very brutal and evil which is what is needed for this music, while the production sounds very professional and reminds me of the sounds of the early to mid 90's Swedish black metal classics, as for the lyrics they seem to cover some dark topics that kind of have a left hand vibe to them judging by the name of the songs.

In my opinion this is a really good album while this recording kind of seems too long for a fast black metal with a time limit of 50 minutes I still feel this band has a lot of potential and the brutality of this album is among the most skull crushing I have heard so far and this is the heaviest one man band I have ever heard.

RECOMMENDED TRACKS ARE "Beasts From The Sea" and "Flood Of Fire" which mixes some effects in with the Heaviness and speed. HIGHLY RECOMMENDED