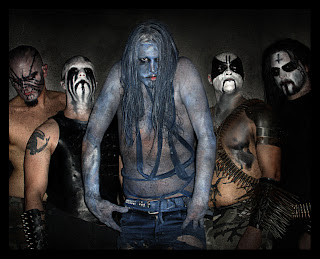 Can you tell us about your band, when it started and what your goals were in the beginning?
The band was formed back in 1994 with the aim to play hellenic black metal. Our goal was to partake in the revolutionary-back then- underground black metal scene, something to which we are still loyal.

2. Do you feel you have accomplished what you wanted over the years, or is the best still to come?
From one point of view, maybe we have accomplished more than what we wanted in the beginning, but then, who knows what the future will bring tour way? Life without End.

3. How would you describe your musical sound?
Brutal black metal. Plain and simple.

4. How has the band progressed over the years?
Naer Mataron have expanded their sound from the purely traditional style of the first albums to the extreme boundaries of the genre, without losing anything from their identical atmosphere and the original feeling. Unlike most of the bands nowadays, we become more extreme and more brutal as time goes by.

5. What direction do you see the music going into during the future?
As I just said before our path is one of no return. We do not compromise when it comes to our sound, so what you can expect from our next album is for once more, a big step further our last accomplishment. Extreme speed, unholy riffing and breathtaking atmospheres. More extreme and more brutal than anything you have heard from us until now.

6. Were did you come up with the idea for the band name?
It is taken from the Sumerian tradition, "Nar Mataru" is the underworld, a name that perfectly describes our source of inspiration.

7. What was it that got you interested in black metal?
The black metal ideology-what it stands for: no compromise, no commercialism, the profound urge to explore the dark depths of the human soul, the creativity to transform this experience to music, and the will to release it, either it's going to sell or not.

8. Were do you see black metal heading into in the next couple of years?
I don't know... I can't follow up with the nowadays black metal reality... I'm still into the old '90s stuff and I can see little in common with what's going around now. Anyway the majority of what I can perceive is heading far away from what black metal is all about.

9. How would you describe your live show and what are some of the best gigs you have played so far?Our live show is our manifest of black metal war. Either we can utilize our inverted crosses, goatheads and burning pentagrams or not, we are committed to giving a full-on black metal assault on stage. There are many memorable gigs for me personally like 2003 Thunderroad Festival, 2005 Inferno, 2007 Nacht der Drohenden Schatenor some dates from our european tour last june... But now we're looking forward to unleash our war in south America with the "Apocalypse of the Ancient Ones tour". Beware,before we return in the night...

10. I noticed in your logo you utilize runes, how would you compare to Northern pantheon to the Greek pantheon?
You mean the rune-baphomet. This was done to personalize the baphomet symbol and bring it a bit closer to our band's concept. The runes do not spell a word as it happens with the qabbalistic symbols spelling "Leviathan" in the original baphomet, but represent concepts and ideas that inspire us. This is no attempt to compare Northern to our Hellenic tradition. We are inspired from history and ancient tradition in general, either this is Hellenic, Northern European, Mesopotamean, Hindu etc.

11. What approach does the band use to Satanism and Occultism?
Satanism is approached as an expression of the Faustian Spirit inside us. The Luciferian Revolution, a factor of destruction/creation resulting to evolution. Traditional occultism is a subject that has not concerned us as band.

12. What are some of your main influences music wise or non music wise?
Musically I would say mostly the traditional black metal sound. From BATHORY to norwegian black metal. Lyrically ancient tradition, history and the dark side of human nature.

13. What are you listening to nowadays and what would you recommend to people that read my zine?
Nowadays... What I always listened to: all the true black metal of the old times, U.S. death metal, soundtracks and anything dark, satanic and bruta lthat comes along. But I'm not really into the stuff that's going around these days, except for some classic death metal bands that still shred.

14. What are some good films or books that you would recommend?
I'm afraid we need an extra interview for this subject. I read a lot and watch a lot of movies. By the way did you hear about big studios shooting a movie titled "Lords of Chaos", based onMoynichan's book? Actually it will be about the murders and church burnings in Norway. Now that's a strange thing... From the early underground to the movies... Maybe that's what LaVey meant when he wrote, "This is the Age of Satan"?

15. Any final words?
We always shall be true to our original concept: constantly progressing
towards more extreme paths, evolving to an ever-expanding war machine. We
hail those who join us in our

unholy conquest and promise new battles yet to come, forever in the shadow
of the sword. The world is ours.

16. Thanks for the interview?
Thank you too, it's always a pleasure to talk about our band.

Posted by OccultBlackMetal at 3:10 PM