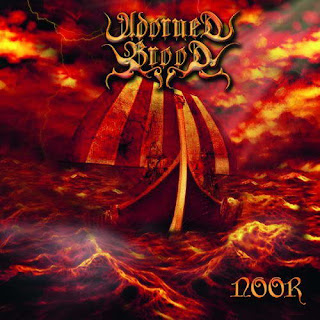 Adorned Brood are a band from Germany that has been around since the mid 90's and are on the first bands to mix black and viking metal together with folk music elements and this is a review of their 2009 album "Noor" which was released by Black Bard Entertainment.

Drums are mostly mid paced to slow beats with no fast playing or blast beats, while the flutes have a pagan/folk metal feel with some keyboards being used at times, as for the bass playing it follows the riffs that are coming out of the guitars.

Rhythm guitars are mostly traditional style riffs without the black metal riffing that was dominant on their earlier releases, while the lead guitars are very melodic sounding guitar solos that sound very talented, as for the acoustic guitars that have a medieval feel to them that calls up the ancient Norse gods.

Vocals are mostly black metal style screams with a lot of clean singing mixed in that have somewhat of a power metal feel to them, while the lyrics are written in a mixture of German and English and cover Norse Mythology, darkness, evil and metal, as for the production it has a very professional sound and all of the instruments have a very good sound.

In my opinion this is another good album from Adorned Brood and while this band has had always had viking and folk elements in their music I remember there older albums having more black metal influences and while some fans of their older material might be disappointed this album should still appeal to fans of viking/folk metal. RECOMMENDED TRACKS INCLUDE "Storm" "Sons Of The Damned" and "Trollmelody". RECOMMENDED BUY.

Posted by OccultBlackMetal at 8:08 PM