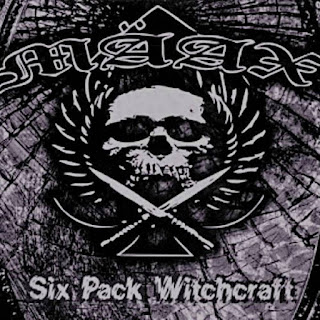 Maax are a band from Indiana that has been reviewed previously that started out as straight forward black metal but has evolved into a black/thrash metal band with this e.p and this is a review of their release "Six Pack Witchcraft" which was released by Abyss Records during the year of 2010.

Drums are mostly fast with some blast beats being thrown in at times, while the bass  playing has the classic thrash meets NWOBHM feel with somewhat of a hardcore punk attitude.

Vocals are mostly high pitched black metal screams with some thrash style gang back up vocals, while the lyrics cover drinking, Luciferian, and some hateful themes with a party attitude, as for the production it is very raw and primal and it gives the music the black metal edge even though this release is more black 'n' roll.

In my opinion this is a little bit better than the last album and I feel this style fits them a lot better, hardcore black metal fans might be disappointed, but fans of beer drinking black/thrash should enjoy this e.p. RECOMMENDED TRACKS INCLUDE "Go Fuck Yourself" and "Six Pack Witchcraft". RECOMMENDED BUY.

Posted by OccultBlackMetal at 9:15 PM